We be Goblins too Session 1

by Ralph on June 25, 2014
RPG
80
0
previous article
A World of Dew interview
next article
Dungeons and Dragons Basic Free PDF 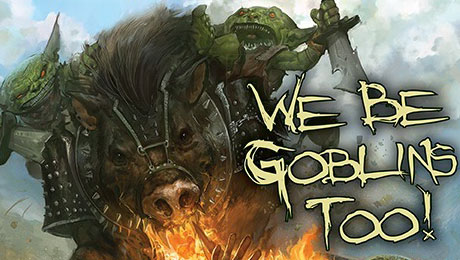 As we were playing close to Free RPG Day, I decided to take one of those modules to run for my regular group. As I didn’t have the Free RPG day module for this year yet, I picked last year’s adventure by Paizo Publishing. Patrizia played the role of Reta Bigbad, Marc played Chuffy Lickwound, Steven played Poog of Zarongel, and Mogmurch was an NPC for this session. So without further ado: We be Goblins too Session 1.

The session starts with Reta, Chuffy, Poog, and Mogmurch returning home from a big adventure and defeating the goblin cannibal Vorka, only to find that their tribe, the Licktoads, has been destroyed by human adventurers. They carefully approach the Birdcrusher territories, fearful of a possible hostile encounter, but find the Birdcrunchers all holed up in one of their caves. When they are spotted, Wise Mummy Sprattleharsh approaches them and tells them of their missing chieftain. Reta immediately volunteers for the job but Mummy Sprattleharsh feels potential chieftains need to be tested first and calls for a Chieftain Moot.

While the rest of the Birdcrunchers cheer for a night of festivities, the four ‘heroes’ feast on all sorts of birds and strong ale as they try to get some more information on their new tribe. The learn that Mommy Sprattleharsh is not to be messed with and questions about the former chieftain are met with “Hey look, more raven eye pudding!”. Poog uses his ability to speak with animals to interview a few captive birds and learns that at least three chieftains have gone missing so far. He also passes around his lucky toad for everyone to lick but when it’s passed back to him, the poor frog is missing two legs. He is however happy to learn that the Birdcrunchers don’t have a representative of Zarongel and sees his flock grow exponentially in his mind. Reta spends the evening drinking loads of ale, and showing the Birdcrunchers how tough she is. After blowing up a few gobins, Mogmurch is given a wide berth by most of the Birdcrunchers. After exploring the cave, Chuffy joins a number of goblins for a musical intermezzo swinging around his cowbell fervently.

The following day the true test awaits. Reta, Chuffy, Mogmurch, and Poog are taken to a valley and blindfolded while Mummy Sprattleharsh explains to them the rules of the first contest. Reta misses her first shot but hits one of the goblins in the crowd to the delight of the Birdcrunchers, Poog and Mogmurch both miss their shots, but Chuffy is able to spike three seagulls with an incredibly accurate (or lucky) shot. The second shot Mogmurch misses again, while Reta is able to hit a seagull. Poog throws some of his pickled fish heads in front of him in the hopes of luring the sea gulls closer but he still misses his shot. Chuffy spikes his stuffed raven on his arrow and fires it quickly while the Birdcrunchers cheer for another succesful shot by Chuffy. For her third shot Reta manages again to hit a sea gull. Chuffy tries to sabotage Poog’s bow but is caught in the act as Poog was communicating with the sea gulls to once again lure them closer. Moments later Poog sets Chuffy on fire with flames jumping from his hands and he’s even able to hit some sea gulls with it too. Mogmurch meanwhile gets fed up with his poor marksmanship and hurls a bomb at the sea gulls, pretty killing all that was left of the swarm. Round one scoring: Chuffy 14 points, Reta 11 points, Poog 10 points, Mogmurch 10 points.

The stirge swamp stomp test has the goblins originally heading to different posts, except for Reta who follows Poog and pushes him into the water. Mogmurch tries to stomp a stirge but fails while Chuffy kills two stirges after which he also is pushed into the water by Reta. When Reta finally catches up with Mogmurch, she fails to shove him off the posts and as a result is thrown herself into the water. After the second test the scores are: Chuffy 18 points, Mogmurch 15 points, Reta 11 points, and Poog 10 points.

For the third test the goblins are bound and pushed into the famous bird pie, accompanied by four eagles. Mogmurch is able to free himself from the ropes and climbs out of the pie immediately to take first place. Chuffy is able to wrigle out of his ropes too but instead of leaving the pie, he goes to Poog and cuts him loose. Poog thanks Chuffy by climbing out of the pie and taking second place. Reta stays in the pie and slays the four eagles. The final scores after the third test are: Reta 31 points, Mogmurch 25 points, Chuffy 21 points, and Poog 15 points.

Reta gets her wish and is crowned the new chieftain of the Birdcrunchers. This signals the start of a huge party where the Birdcrunchers honor their new chieftain with all sorts of weird gifts and habits. Reta is also able to plunder the chieftain’s treasure chest but doesn’t share any of the loot with her sub-chieftains.

We be Goblins too Session 1 – Memorable moments of roleplay