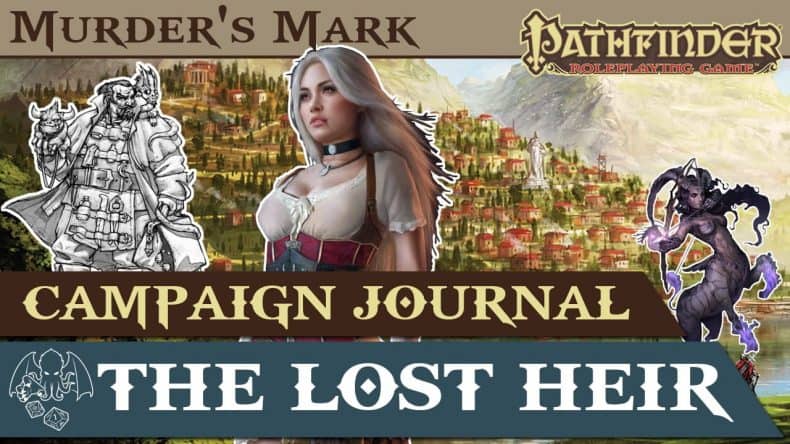 In The Lost Heir Episode 3 I will talk about the first adventure module that we played in our one-on-one Pathfinder RPG campaign, Murder’s Mark.

In the beginning of the campaign Erasmus and Aylana are still located in Egorian, the capital of Cheliax. They live on the attic of an inn when they receive a visit from Count Jeggare and his bodyguard Radovan. Erasmus has done some work for the count in the past and Jeggare brings some dire news.

Apparently word of a possible heir to House Asgavan has been circling in the noble circles around court. A former butler of the House was located and under torture admitted to an heir being born. This prompted Erasmus and Aylana to pack up their belongings and leave. Count Jeggare was kind enough to arrange transport through magical means.

As our adventurer duo steps out of the magical portal, they find themselves in Magnimar where they quickly book a boat trip towards Ilsurian. During their exploration of the town they spot a big caravan of travelling wagons; the Umbra Carnival has come to Ilsurian. Aylana immediately gets very excited about visiting the circus.

While playing games at the Midway of the Carnival, I introduced Borvius Monchello during a strength test. Unbeknowst to our heroes, Borvius and his wife are the main villains of the scenario. Erasmus and Aylana participated in pretty much all of the games and even won some prizes.

I used the Harrow Deck to make an actual reading for the characters which was a lot of fun as I had to improvise some kind of prophecy while I was flipping the cards. Then ‘the dragon’ escaped but was rather easily foiled by Erasmus covering it with a large tarp while Aylana kept the creature at bay with fire.

The next day Erasmus and Aylana are being summoned to the circus and asked by owner Almara Delisen to solve a murder the circus is being blamed for. Apparently Archavin Walder didn’t come home tonight and was found murdered on his way home from the circus. Sheriff Feldane takes our duo to the crime scene where they question the clues that are found.

Then the group heads towards Archavin’s shop The Locked Box where two skulks are discovered. One of them is killed, and the other one takes into custody. After the necessary interrogations Erasmus and Aylana start planning a raid on the tunnels of the skulks.

As this is not a part of the adventure, I hit the group with the next murder case. This murder scene can be found on the circus grounds where Sister Woodmere has been killed. Again Erasmus is able to find some clues which do not fit the scene.

The party then confronts the sfinx and figures out the illusion. Then local town drunk Filton Legg gets murdered and an important clue is found that leads our duo to Brayton Manor where the Thieves Guild has set a trap. Erasmus is able to fight off the thugs and with the help of a summoned Zhura also defeats Borvius Monchello.

The round-up of the rest of the Thieves Guild is left to the town guards. During the night however a fire breaks out in the local prison and a burnt body is found which is assumed to be Borvius. Upon further investigation it is discovered that is not the case at all. What really happened is that Robella, Borvius’ wife broke him free from prison for them to return perhaps at some future point in the campaign.

The Characters <<< Previous Episode – Next Episode >>> Feast of Ravenmoor

You can purchase the Pathfinder RPG products mentioned in the video through below affiliate links (as an Amazon Associate I earn from qualifying purchases) :

by Ralph on September 6, 2019
Welcome to The Lost Heir Episode 1 in which I will introduce the campaign concept. The Lost Heir will be a new series on the channel in which I provide a campaign journal of a series of games I’m playing with my good friend Koen. The campaign is a [...]