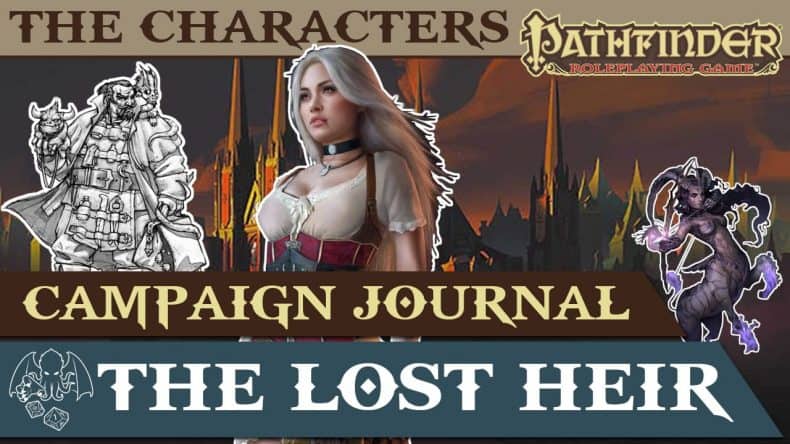 In The Lost Heir Episode 2 I will talk about the two characters that make up this one-on-one Pathfinder RPG campaign.

Inspiration for the background came from me reading a snippet of fluff in the Pathfinder sourcebook Seekers of Secrets. The book details the Pathfinder Society and mentions a particular Lost Expedition that peaked my interest. Sheraya Solistar, a princess of Cheliax, disappeared and since she was the last heir of House Asgaven, the power shifted to House Thrune.

I decided that my character Aylana Solistar would be the daughter of Sheraya Solistar. That would provide us with plenty of possible plot hooks whenever we wanted to include the character backgrounds in the campaign. Koen on the other hand wanted to play an as generic as possible character that would fit into any campaign.

We made a few changes to the ‘canon’ in that we haven’t really defined in which year we are playing so the date of the disappearance is not as relevant. Other than that we changed the location of the missing expedition from the Realm of the Mammoth Lords to Ustalav. That Mammoth Lords stuff was fake news anyway.

Aylana is a 16 year old Dhampir Summoner who will start the campaign at level 1. She has grown up in the care of Erasmus Dhorne and has been joining him on expeditions from a very early age. During one of those expeditions on a cemetary, Aylana was attacked by monsters and was rescued by a creature that was a mix between a vampire and a centaur. This turned out to be her eidolon Zhura.

Aylana is very interested in history and the occult, something she definitely ‘inherited’ from Erasmus. She’s quite studious and even speaks languages like Azlanti and Jitska. Another favorite passtime is Fortress, an abstract strategy game similar to chess.

At the start of the campaign Aylana is not aware of what happened to her mother. She has a craving for blood which she drinks from a small flask and sees this as an illness from which she would love to be cured.

Zhura is Aylana’s eidolon, a mix between a vampire and a centaur. She has been named Zhura after an infamous vampire queen.

Zhura is very protective of Aylana but understands she can’t be seen walking around with her in the city.

Erasmus is a jack-of-all-trades who was inspired by Indiana Jones, the Witcher, Han Solo, and Van Helsing. He is from Chelish descent and used to be a teacher at the Egorian university.

He has worked with the Pathfinder Society many times in the past although he never joined the society. He’s more like an expert for hire in case someone is looking for occult knowledge or demonology.

Erasmus grew up with Aylana’s mother Sheraya Solistar as his parents were in the employ of House Asgaven. He knows what happened to Sheraya as he was a member of the ‘lost expedition’ and was the only person to get away.

When he returned to find Sheraya, she had been taking captive by a vampire and had become its thrall, addicted to blood. To his surprise she was also with child. When the vampire revealed himself, Erasmus had to make a difficult choice. He got away a second time, but could only rescue the baby girl, Aylana, to whom he has been a father figure ever since.

You can purchase the Pathfinder RPG products mentioned in the video through below affiliate links (as an Amazon Associate I earn from qualifying purchases) :

by Ralph on September 6, 2019
Welcome to The Lost Heir Episode 1 in which I will introduce the campaign concept. The Lost Heir will be a new series on the channel in which I provide a campaign journal of a series of games I’m playing with my good friend Koen. The campaign is a [...]