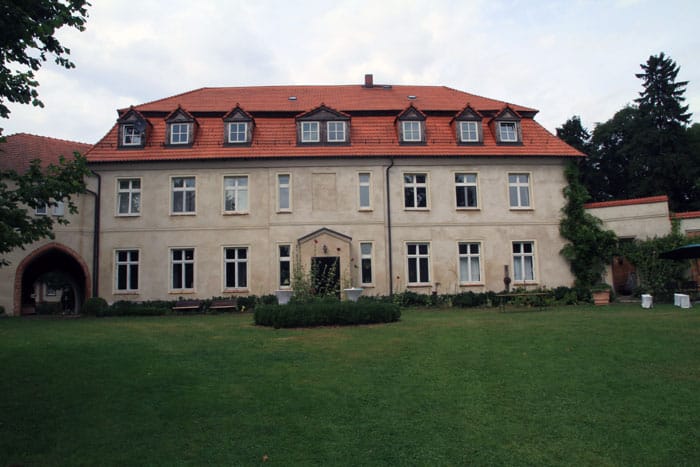 The Kraken 2014 Day 2 starts with a conversation about roleplaying games design at the breakfast table. A statement is made that roleplaying games could learn a lot about tight game design from boardgames. When I countered with the difference between the two being that the rules in board games are supposed to be followed, whereas for roleplaying games this is not the case, my fellow gamer felt that a rule was placed in the game for a reason by the designer and in order to get the full experience of the game, therefore the rules should be followed.

There was some agreement amongst the table so maybe my group is more of an exception due to its strong focus on setting and story. I don’t think anyone in our group knows the rules to for example the Pathfinder RPG that we play regularly, me as the storyteller included. We grasp the basic concepts of using a D20, adding or subtracting bonuses, and the very basics of how a combat should run and that’s about it. But there’s a lot of roleplay going on and everyone has fun so that’s all I can ask from this hobby.

After breakfast I joined the same group as yesterday for a couple more games of 7 wonders. And I even managed to win one of the games. 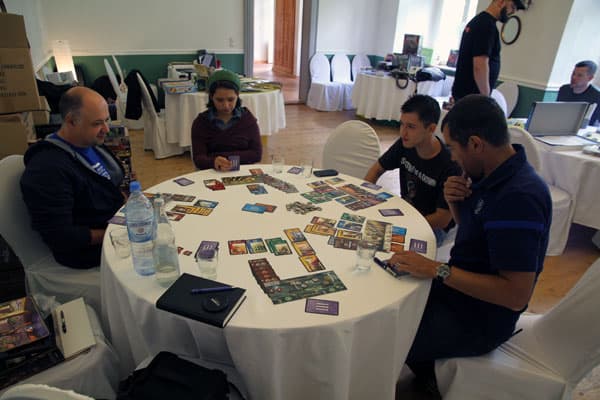 Then I went to the Q&A by Sandy Petersen and Jeff Richard called „Ask us anything about Glorantha”. Lots of stories about the old Chaosium days when Sandy and Greg Stafford were working on Glorantha. Sandy also predicted Glorantha to become more popular in the next few years, thanks to the new Gloratha Guides and also because of his new game Glorantha: The Gods War which will introduce a lot more people to the setting. Sandy also went into a few of the expansions he’s already planning for The Gods War, being an expansion for the races (Elves, Dwarfs, even the Ducks), and expansions for the War Gods, Secret Gods, and Magic Gods, in which each faction gets one or more new gods to play with.

After the Q&A I spent some time checking out the archery and axe throwing demonstrations that were going on in the beautiful noon sun.

In the afternoon I played Lords of Waterdeep with the Scoundrels of Skullport expansion. We played the game twice and I must say I quite liked the additions of the expansion. While some of the new quests seem to deliver a lot (40) of victory points, the corruption mechanic is always present for big quests, buildings with great resources and so on. I didn’t win either game but it was great fun. Also great diversity was seen between the two games. In the first one a lot of possibilities to get rid of corruption were on the board so everyone was happily gathering corruption. In the second game however losing corruption proved to be a lot more difficult. 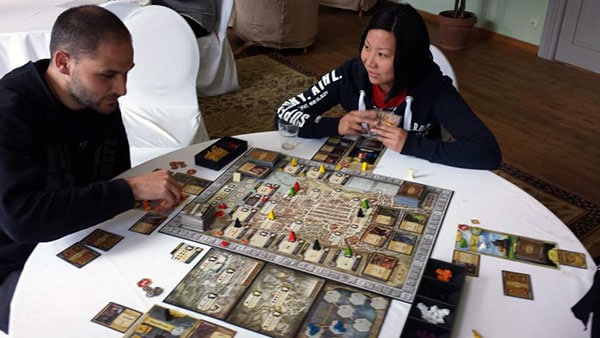 In the evening slot I scheduled a roleplaying session for Call of Chulhu with Glyn White. I had played in several games with him as a player or GM at the last Kraken and really enjoyed both his style of playing and running a game. The scenario was called The Posse and was about a posse being formed after a gruesome murder. I played the character whose wife and baby were murdered. Not the most simple character to play but it gave me the opportunity for an extremely driven, and at times no-fear approach. My character sheet seems to have gotten lost or maybe I returned it to Glyn but unfortunately I don’t recall the name of my character. The posse consisted of Abraham Loomis, a local redneck played by Gaz, tracker John Leiper played by Simon, and retired army officer Rufus Donaldson played by Lisa. The posse will be hunting down 2 criminals known as the Harper brothers, who have been seen in the area prior to the murder.

Leiper got us on track following the trail towards a river crossing where the ferryman’s raft turned out to be on the other side of the river. Leiper then found a canoe and him and myself headed to the other shore. When we had almost reached the raft, I discovered a corpse in the water, reached for it, and grabbed right into its disemboweled stomach wound. It took all my strength not to throw up. Credit goes to Leiper for keeping the canoe straight while I tried grabbing the corpse. We manage to reach the other side of the river and the corpse turns out to be James Tomkins, the ferryman. We return to the rest of the party and leave Tomkins’ corpse in his hut for future burial. At this opportunity the 2 NPCs decide it would be healthier for them not to join the party so they leave, but not before handing over some of their weapons and ammo.

On the other side of the river we are able to keep track of the trail that leads us into some indian burial mounds. Donaldson feels this is the perfect location for an ambush and Leiper tells us the Harper brothers had some history of having allies among the indians so we proceed carefully. The trail suddenly splits. It seems they have gone into the mounds themselves so after some discussion Donaldson and myself climb up a mound and enter the grave. We find some remains of a camp and a molten golden protection amulet. Not touching anything Donaldson and I returned to the posse and we continued our way along the trail until we met some indians.

Leiper apparently spoke some mishmash of indian so he spent some time talking to the indians who knew the Harper brothers were bad news. They gave us directions to a route with which we could cut down our travel time significantly. As a thank you I gave a golden locket to them explaining it was my wife’s jewelry and I thanked them for their help. In return I received an indian protection amulet.

On our new route we made good time and ended up in a lumber camp near a river where the workers had seen the Harper brothers. They had left behind the horses they stole from me but the workers seemed to claim ownership over them now. I just paid them off. Some discussion took place then on whether we should follow the Harpers over the river, or take the chance of cutting off some distance overland but miss them if they went to shore somewhere in between. I decided to take the overland route, with Leiper following me a bit later. Donaldson and Loomis navigated the river with a raft and Donaldson’s navigation maps.

The overland gamble worked as I soon spotted the Harpers on the river in their canoe. I overtook them on land and set up an ambush in some bushes near the river. When they came close I fired some shots, hitting one of them in the hand. When they had passed me, I fired another shot hitting the big one in the head which made him slump over. I moved up the bank again, and overtook them on land once more. To my horror the big one was still peddling when they came close a second time. In addition one of their bullets hit me in the head. My lust of revenge is the only thing that kept me going, with blood gushing down my face as Leiper caught up with me and tried to bandage my wounds.

Together we set up another ambush further down stream but the Harpers moved their canoe behind some small islands in the river. We waited for Loomis and Donaldson to arrive on the raft and together headed for the islands where we were greeted by some undead creatures we were able to slay with Loomis and his axe taking down these creatures one after the other. The Harpers had gone to shore so we followed close behind and by nightfall we suddenly heard a baby crying. Sneaking up on the camp Leiper discovered a single silhouette sitting on a tree stump. It turned out to be a woman cradling a dead baby.

Having lost my only child to the hands of this Harper scum, this scene sent me in a frenzy and I rushed off after them. The trail split however at a crossing with 2 horses going one way and 2 horses going the other. Myself, Donaldson, and Loomis followed one trail, while Leiper tracked down the other. Leiper turns out to have been following two women and shots were fired in his direction when they crossed a river so he decides to turn back and try to hook up with the rest of the posse.

The three members of the posse finally get within shooting distance of the Harpers and take some shots which are uneventful until Donaldson decides to shoot the horse of one of the brothers which drops from beneath him. Loomis goes in for hand to hand combat followed by myself, while Donaldson keeps firing from a distance. I accidentally hit Loomis with my axe, and Harper is able to finish him off with just one hit. The battle continues with Donaldson and myself until finally Harper goes down but is not out. In a frenzy I keep hitting him with my axe as he taunts me in going for his neck. “Go on, kill me and be cursed” were his last words.

Leiper arrives shortly after the battle with me lying on the ground more dead than alive. The gunshot wound to my head and the battle with Harper have taken their toll and I’m skipping in and out of consciousness. Leiper and Donaldson tie my onto one of the horses as some strange winds and noises are being heard in the forest. The posse decides to run and more and more noises of crashing trees are heard behind us. We run into an indian camp which is doing a ritual that seems to stop whatever is chasing us. In the last stretch towards the camp I slip from the saddle, hit the ground and die from impact. When Leiper and Donaldson go looking for me the next day (after the mysterious force has disappeared), my body is nowhere to be found.

Another one on the list of Glyn’s awesome Cthulhu adventures. Even though the complete adventure is pretty much one long chase scene, there was still a lot of tension, inching closer and closer to the Harpers. After being shot in the head for almost all of my hit points, I just kept rolling 2’s and 3’s whenever Glyn asked for a constitution roll. With my face shot off and my ear dangling from its remains, I kept going and going … until I fell of my horse. Not the most heroic death I must say but a great gaming session no doubt !

I’m not quite sure on which date the Kraken 2014 – Secrets of Glorantha seminar with Sandy Petersen took place but you can watch it in the video’s below.