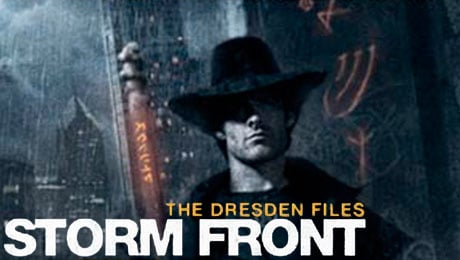 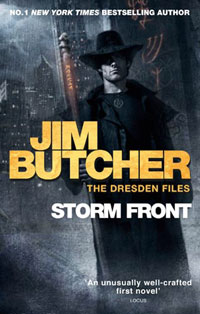 It seems I’m a bit late to the Dresden Files train. I had heard of the Dresden Files RPG but wasn’t aware it was based on a series of novels by Jim Butcher. After having read through the complete A Song of Ice and Fire series, I was looking for some lighter (and shorter) material to read. A friend of mine suggested I try the Dresden Files and he borrowed me the first novel in the series, Storm Front, which was first published in 2000.

The Dresden Files is a series of novels around main character Harry Dresden, a private investigator from Chicago who also happens to be a wizard. Business is quite slow so Harry is very pleased when all of a sudden he gets two cases at once. One case has him locating a woman’s missing husband, the other case is a consulting job for Chicago PD’s Special Investigations director Karrin Murphy.

Harry joins Karrin Murphy and her colleague detective Carmichael at the scene of a gruesome murder where two lovers were killed while having sex, having their hearts somehow ripped from their ribcages. Harry immediately recognizes this to be black magic but is reluctant to tell the police. When he exits the scene, he’s summoned into the car of local crime lord Gentleman Johnny Marcone who tells him to back off the case.

What follows is a mad search for a missing husband and a wizard wielding black magic, all the while keeping the police guessing, and outrunning nosy reporters and Morgan, an enforcer of the White Council of wizards who thinks Harry is responsible for the black magic killings.

Storm Front is an entertaining read with plenty of humor, whether it’s Harry’s witty remarks and thoughts (as the story is written from the main character’s viewpoint), him negotiating the recipe of a potion with a talking skull in his basement, or bribing a faery with a pizza delivery. It’s an action-packed story that makes you want to keep reading as it works its way towards the grand finale.

Storm Front takes place in a modern day real world setting but there’s magic, and apparently vampires, faeries, and demons also exist which leaves me curious for more. Fool Moon, the second novel in the series will hopefully satisfy some of that curiosity and continue along the same lines for another fun read.

If you’re looking for a lighthearted 300+ page pocket sized novel with plenty of action in a modern day setting with fantasy elements, definitely give Storm Front a shot.

by Ralph on November 23, 2014
This year marked my first visit to Lucca Games in Italy and color me impressed. Any convention that can take over a complete city deserves a lot of respect. Lucca Games 2014 was held in Lucca, a small city located in Tuscany and dating back to Roman [...]
comments
Leave a reply