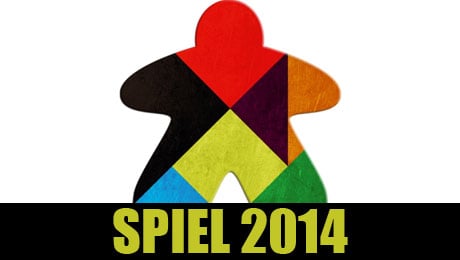 Spiel is Europe’s biggest gaming convention and gaming should be taken as broadly as possible. There’s RPGs, LARP materials, boardgames, comics, artists, and so on. My main interest in going to Spiel has always been the RPG section which this year was located in Hall 2.

On Thursday around noon I walked into one of the Spiel 2014 halls and the gaming buzz immediately surrounded me. One of the first things I saw was a Shadows of Brimstone banner so I headed over right away to take a look at the game. And it looks great ! 2 demo’s were in full swing with designer Jason Hill explaining the game to the onlookers. Jason also explained that right at that moment, a member of their crew was driving around Germany to pick up the game so kickstarter backers could pick up part of their rewards. I was pleasantly surprised to hear that the crew member in question was none other than Brian Snoddy, who I know from back in the day when I was still working on the Buccaneer Bass fansite for the Iron Kingdoms RPG, a game of which he’s the co-founder.

After that I went to the House Artreides booth where I spend most of my money every year and this year was no different. While going through their Call of Cthulhu RPG products, one of the vendors approached me with a special offer. They had in their possession the official Pelgrane Press office proof of the Trail of Cthulhu RPG, which was donated to the GenCon 2007 charity auction and whether I was interested in purchasing that item. I didn’t have to think about that one very long. So I bought this one, and asked them to store the rest of the books I wanted to buy until Sunday when I would return to pick up the Shadows of Brimstone kickstarter rewards. 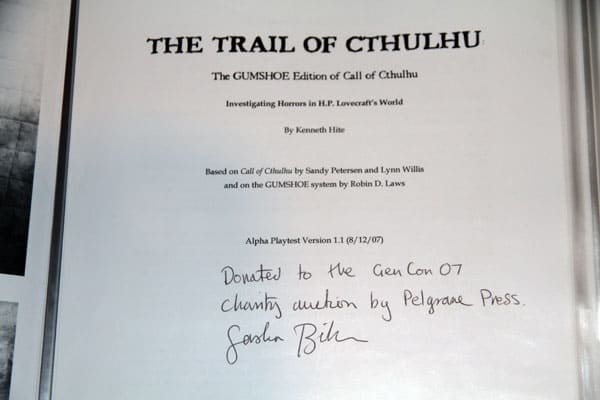 Spiel 2014 Find of the year : the alpha playtest of Trail of Cthulhu

I walked around the hall for a little while and headed over to the Petersen Entertainment booth where Sandy’s sons were giving demo’s of Cthulhu Wars. In the booth next to it that housed Moon Design Publications and the Runequest Gesellschaft, I spent some time talking to creative director Jeff Richard who was proudly displaying the massive Guide to Glorantha that at that point had already almost been sold out. He told me that German customs had held the kickstarter rewards for almost two weeks which caused his backers to still not have received the books. Luckily all the fans and backers that walked up during our conversation were in great spirits, seeing how massive and beautiful the guides were.

Then Fabian, the organizer of the Kraken, arrived at the booth and we spent some time chatting about Robin Law’s Sharper adventures in Heroquest Glorantha. He informed me that the first printing which was available at The Kraken 2014 was printed in 25 copies. The version for sale at the booth was a second printing of 50 pcs of which I also picked up a copy. He also told me the Kraken reprint of the Heroquest pre-publication numbered 25 copies. We talked some more and he got me into a demo of Sandy Petersen’s new game Glorantha: The Gods War which would take place on Sunday. I then spent some time talking to Sandy’s wife Wendy and their sons, showing me pictures of grandchildren and so on. As a backer I also received a Cthulhu Wars bag and some more merchandising. I then spent some time checking out an ongoing demo of Glorantha: The Gods War and asked Sandy to sign my 2nd edition Call of Cthulhu boxed set. 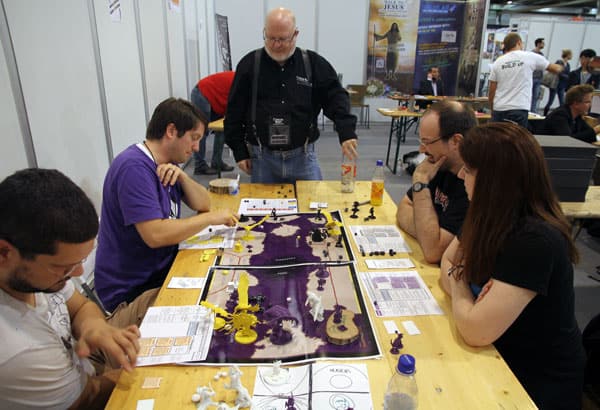 After that I spent some time at the Modiphius booth talking to graphic designer Michal about Achtung! Cthulhu and a very rules-light game called Cogs, Cakes & Swordsticks of which I picked up a copy too.

Then I hooked up with Tobias who I know as Deluxe RPG collector on Twitter. We had some twitter chats about collecting and decided to meet up at Spiel. He was hosting the Munchkin tournament at the Pegasus booth so I walked over and we had a nice chat about our collections and wishlists. A pretty small world, this RPG collector thing, as it turned out we both knew a number of collectors in the States and Australia. 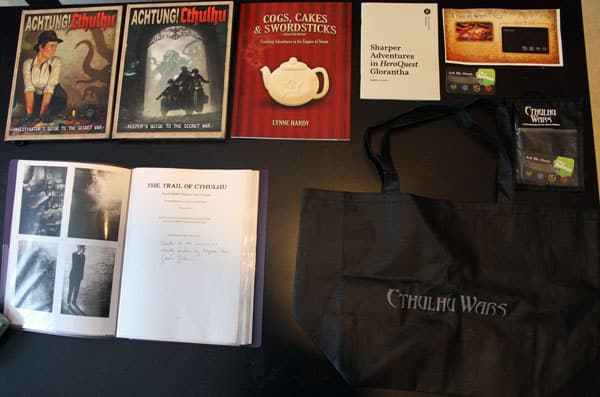