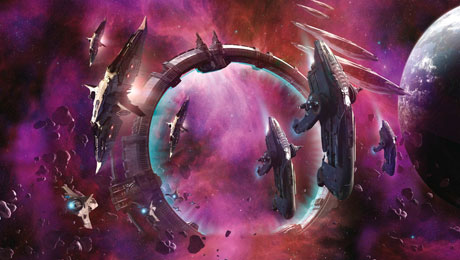 This is the tenth post and at the moment I’m writing this, I’ve only done 2 others. A good lesson for future blog challenges. Start working on posts before the challenge begins. The questions of the March Madness Non-D&D OSR Blog Challenge at the Tomb of Tedenkhamen blog deal with non D&D roleplaying games. As my collection consists of a good number of non-D&D RPGs, I decided to take up the challenge.

I’m not a big fan of science fiction. Although I did watch the Battlestar Galactica series, I’ve never really been into Star Trek, Stargate, or Star Wars. Firefly was pretty cool though and Yoda is the man! When it comes to role playing games, the science fiction game I really like is the Fading Suns RPG.

In Fading Suns humanity has taken to the stars. Huge technological advances made space travel more and more easy and all of a sudden a jump gate is discovered beyond which lie multiple other star systems. And so the diaspora begins and the First Republic collapses. Planet after planet is discovered and humanity finds it’s not alone in the universe. Their run-ins with aliens don’t always go as planned but the Second Republic is the summon of human ability and technology. And then the suns start fading and the church preaches how humanity has sinned all these centuries and how the Pancreator is now punishing them. Noble houses pop up to take control and we go back to a sort of dark ages with hints of technology. There are still computers called think machines but almost no one remembers how to use them. There are spaceships but only certain guilds know the secrets of flying a space ship and have the codes to enter a jump gate.

I really like this game because when you read its history going all the way up to the year 4996, you can but smile and nod and think ‘That’s exactly how it will go’. You have the companies who become bigger and bigger and become as powerful as nations, you have the contacts with ‘inferior’ alien races whose worlds are plundered and whose inhabitants are sent off to reservations (sound familiar?), you have the contacts with the Vau, a vastly superior alien race that obliterates a complete human fleet. So what does humanity do? Send a bigger army over there. You see nobles and church officials make deals that keep them in power and the population under control, …

You can take this setting in a Star Wars direction with space ships battling one another, and players travelling from one planet to the next in search of adventure, you can play this game as a very dark and gritty fantasy game which has hints of technology, you could make it an intrigue-laden mix of nobles fighting for power, … The possibilities, as the game’s star systems, are endless. The fluff is great. And almost all of the books below are setting material. There are only very few published adventures available for Fading Suns. In conclusion it’s an incredibly rich setting and just browsing through the books makes me want to create a character and start playing.

Entries in bold are in my Fading Suns RPG collection