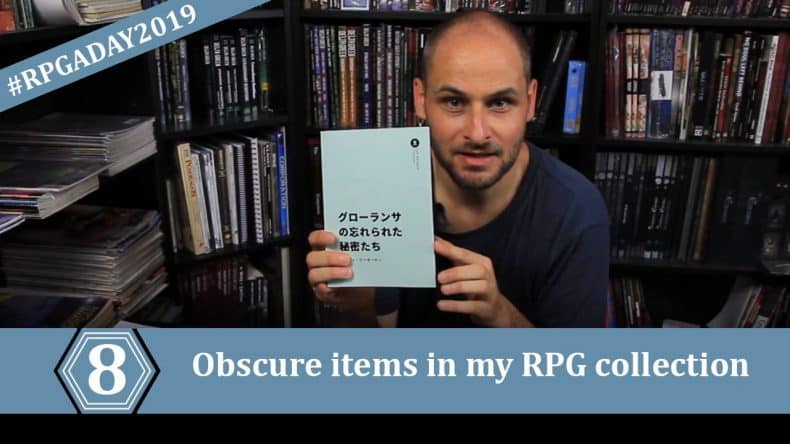 On RPGADAY2019 Day 8 the topic is obscure and I thought I’d go through my collection and showcase some obscure items.

I start off with a question on what exactly defines an obscure item and showcase Courting Madness by Pagan Publishing as an example. I’ve seen several copies of Courting Madness over the years so I wouldn’t categorize it as obscure. But I’m assuming that won’t be the case for everyone. So I tried finding a number of items that would be harder to find than Courting Madness. By all means let me know if you disagree with any of my choices.

I start off with 2 very early Lamentations of the Flame Princess releases. Both the Random Esoteric Creature Generator and Fantasy Fucking Vietnam were released in 2008.

Then I dig into my Call of Cthulhu books to show off a number of Pagan Publishing items such as the Player Aid Kits for Realms of Shadows and Walker in the Wastes. I also show the limited edition of the fiction anthology Dark Theatres of which only 100 copies were created.

An item that definitely high on the obscurity list is the player aid package for Lurking Fears by Triad Entertainment. I’ve only seen that for sale once and purchased it immediately.

And as if I couldn’t get enough of Call of Cthulhu I also talk a bit about the different versions of the 20th anniversary limited edition. But the cherry on the RPGADAY2019 Day 8 cake is the unboxing of 2 very rare and obscure Unknown Armies supplements: the ashcan version of the Unknown Armies rulebook and the Albuquerque supplement.

If you want to pick up some less obscure supplements for the games I highlight in this video, you can purchase them through below affiliate links (as an Amazon Associate I earn from qualifying purchases):

by Ralph on August 6, 2019
RPGADAY2019 Day 6 and the topic is ancient so I have to talk about Cthulhu, right? So I thought I’d issue a challenge to Sandy Petersen.  As the designer of Call of Cthulhu and Cthulhu Wars I think he has earned the right to have the biggest Cthulhu [...]
Comments
Leave a reply