by Ralph on January 5, 2019
RPG
34
0
previous article
Rise of the Runelords Session 5 - The Sock Event and other tales of horror
next article
Collection update: Chaosium fiction 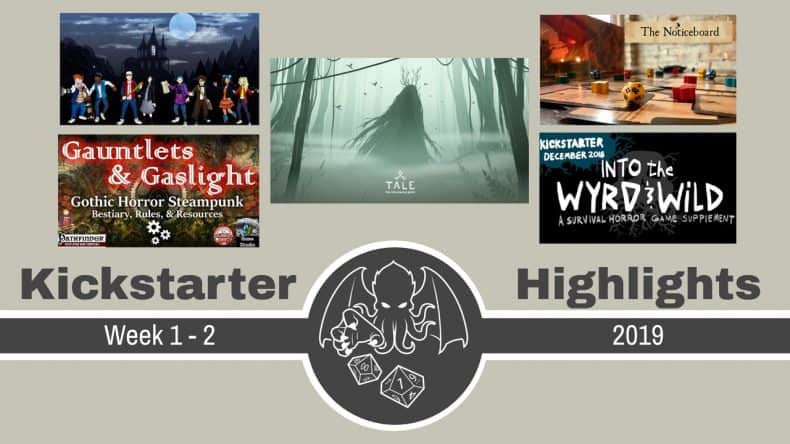 So this happened, I recorded a video for YouTube. As an introvert, being in front of a camera scares the living daylight out of me but here I am, starting the new year conquering fears and being out of my comfort zone.

In this video I’m highlighting 5 RPG related kickstarter projects that caught my eye. Due to several audio issues and me not being familiar with Lightworks, this took a lot longer than expected which caused 2 of the projects to have already ended prior to posting the video. But I don’t want to let my work go to waste so here are my 5 RPG kickstarter picks for the first 2 weeks of January.

The first project on my list is a fun kickstarter by Morgue Miniatures for 8 kids miniatures in which you recognize the typical children’s tropes like the skaterboy, the tough kid, the popular girl, the nerdy kid and so on. These are great for roleplaying games in which you play children like Tales from the Loop, Kids on bikes, or Monsters and other childish things.

Tale is an easy-to-learn fantasy tabletop role-playing game from Norway with a starting guide of just 2 pages and about 30 minutes of character creation. Characters are created with diploma’s that signify the educational background of your character. There are 12 diploma’s in the game for character classes such as the Loremaster, the Smith, the Alchemist, and the Globetrotter. Each diploma comes with uniques skills and actions the player can use and you can add motivations and personality traits to further flesh out your character.

Check out the kickstarter for Tale the roleplaying game of visit the project’s website.

Into the Wyrd and Wild

Into the Wyrd and Wild is a system neutral RPG supplement full of horror and wilderness gaming. The book has new monsters, items and spells and covers rules for wilderness travel, hunting, moon cycles and advice on how to run your own wilderness adventures.

Check out the Into the Wyrd and Wild kickstarter and follow Charles and his projects on Facebook.

Gauntlets and Gaslight is a RPG supplement for the gothic horror and steampunk fan by Infinium Game Studios. The kickstarter will provide 3 Pathfinder RPG and D&D 5E compatible books. Incarnae of Aquilae: Bestiary is a book full on monsters, more specifically Golem and Elemental Constructs. Artifacts & Artifice: Incarnae will cover your need for mad scientist steampunk artifacts while the main book Gauntlets & Gaslight will cover new feats, skill, and classes.

Check out the Gauntlets & Gaslight kickstarter or check out DriveThruRPG for more releases by Infinium Game Studios.

The Noticeboard is a tabletop side-questing RPG that doubles as a tool for DMs/GMs by Wisdom Save Media. If you back the kickstarter, you’ll get quest and hunt cards, a set of D20 dice, meeples and a deck of location cards. The front of the quest and hunt cards will have a story hook, the back of the card will feature information for the Gamemaster to run the story hook. There are 3 ways of playing the game: head-to-head in which no GM is needed and every player controls a party of adventurers and the goal is to become the most successful adventuring party; cooperative where the goal is to clear the Noticeboard of quest within 5 days; and the classic mode where you the GM controls a rival adventuring party.

Check out the Noticeboard RPG kickstarter.

by Ralph on August 8, 2019
On RPGADAY2019 Day 8 the topic is obscure and I thought I’d go through my collection and showcase some obscure items.  I start off with a question on what exactly defines an obscure item and showcase Courting Madness by Pagan Publishing as an [...]
Comments
Leave a reply