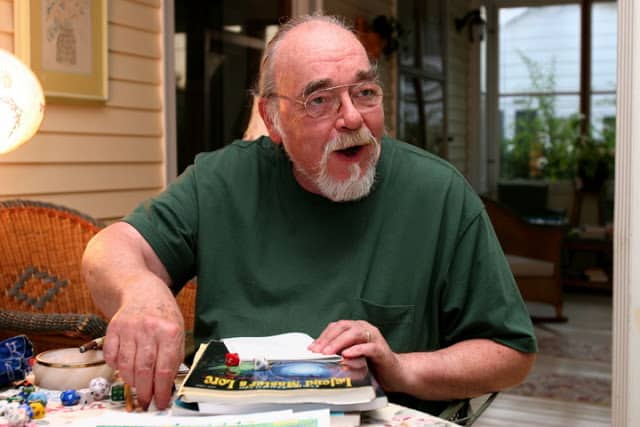 On the 4th of March 2008, the world said goodbye to one of gaming’s greatest, Gary Gygax. It’s been five years already since and I thought I’d share the views of some of Gary’s greatest friends Tim Kask and Frank Mentzer.

When he learned that Gary has passed away, Tim wrote the following :

“My world has been lessened; my friend and one-time mentor is gone. But, unlike the overwhelming majority of us, he will not be forgotten any time soon; he touched too many lives while on this planet.

Several years ago, whilst sitting in the dark enjoying Peter Jackson’s second hobbit opus, The Two Towers, I experienced a quick flash of pride that once I had been a very small part of the cultural phenomenon that had eventually led to this image flickering on the screen before me. Before D&D, the only “fantasy” movies were Harry Harryhausen’s Aladdin and Sinbad movies. (I always regarded the monster movies like Godzilla and Rodan and the like as a separate genre; and never cared for them at all.)

“Before D&D”; that’s like saying “before steam engines” or “before internal combustion engines”, because that’s what D&D was—the driving force behind a veritable revolution in fiction, in movies, in culture and without question, in gaming. The only thing even slightly rpg-like before D&D was Diplomacy; that’s a little like saying that before Gutenberg there were woodblock cutters.

D&D started a cultural tsunami that changed the face of all it inundated leaving nothing the same in its wake.

I first met Gary pre-D&D, through Chainmail. I called him up out of the blue in late ’73 or very early 1974 to talk about medieval miniatures and rules. My call was answered by a most genial and gentlemanly fellow that was the soul of kindness and courtesy who took no offense at being called at home one evening by a stranger. In fact, I got the idea that he admired my initiative in tracking him down. There were other calls, trips to a fledgling convention called GenCon in ’74 and ’75 where we met in the flesh, and eventually I moved to Lake Geneva with my wife and daughter to go to work in his brand-new company publishing his dream.

Gary was very well read, erudite and prone to writing in a style that hearkened back a generation to when writing well was a prized art and good writers were known for their ability to “turn a phrase”. Oh, Lord, could he turn a phrase. My job was to take his writing and edit it down into something more easily digestible by readers not as skilled as he. It used to kill me sometimes; I felt at times that I had to “dumb it down” so less well read readers could understand it; kind of like “Homer for Dummies”. And I mean no slight to those early readers; they were already part of an elite reading audience that had cut their teeth on Vance, Anderson, de Camp and JRRT. They were our first market.

I think back to the times we sat in his study in those early days, smoking a good cigar and sipping some vino. Yarning about the possibilities ahead of us, I don’t believe that either of us envisioned what was ahead for D&D, RPG’s, gaming in general, the miniatures industry or any of the rest of it.

Throughout the entire rollercoaster ride that followed, I never knew the man to put on airs or to get a larger-than-life sense of himself. He remained “just Gary” and was somewhat bemused by the whole phenomenon as it developed. Look how many quotes attributed to him say that what he thought about something wasn’t that important in the cosmic scheme of things. I never knew him to be short or curt or nasty with anyone at any convention. He shunned that kind of limelight.

Gary’s nature was such that he never looked for the bad in anyone; an argument can be made that that trait was a failing and led to getting involved with some people that did not share his decent nature and later betrayed him or sold him out. Be that as it may, he was at heart a very decent and moral man throughout his life. He strove mightily to be a good father and husband. He was a great boss and collaborator, and a pleasure to edit.

Think about it: decent and honest, talented, well read, imaginative and strove to be a good father. Can any of us wish for more to said about us at our passing?

I am going to miss the quiet breakfasts we had planned for his porch at LGGC; I had to suck it up to face attending in his absence. But I will always treasure the memories that I have. I must content myself with the thought that God had need of a great storyteller and DM to run games in heaven, and Gary is there now, on a wonderful screened in porch, with a gentle breeze to waft away the cigar smoke, but not strong enough to blow his notes around, beguiling and challenging the great minds around him to step into his world and have some fun. My life is better for having known him, and I will miss him greatly.”

And below Frank talks about Gary and his legacy.