The second event of the Pathfinder Society Hasselt took place on the 19th of October and featured a similar amount of player’s as the Pathfinder Society Hasselt September event. After playing the introduction scenario In service to lore during the first event, this time Season 5 was officially kicked off.  The adventures which were run were The Glass River Rescue by Mike Shel, and The Stolen Heir by David N. Ross. 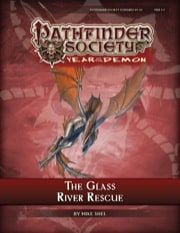 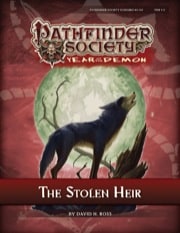 The Glass River Rescue and The Stolen Heir are both 1st to 5th level adventures for the 5th season of Pathfinder Society Organised Play. In The Glass River Rescue the mission is to locate and retrieve a number of dwarven diplomats that have been kidnapped by followers of Razmir, the living god. In The Stolen Heir the players are sent to Andoran in search of wealthy patrons for the Pathfinder Society’s efforts in Mendev. The patron’s daughter has just been kidnapped but all is not as it seems.

Despite having a Taldor faction character and The Stolen Heir having the Taldor plot rewards, I ended up playing The Glass River Rescue. My character Henricus was joined in this adventure by Junius Baradin, a noble from Cheliax, Idran, the scarred mysterious follower of Sarenrae, a female ninja called Reiko, and a Gnome summoner called Ziatlan Ghianas or Kledde, whichever we preferred. The Gnome was accompanied by his eidolon succubus Glynlissa, who also wears a symbol of Sarenrae.

The adventure starts in Kerse, in the manor of a Kalistocrat named Temel Passad, where we’re given a letter from Venture Captain Ambrus Valsin. The letter tells us that a group of dwarven envoys have gone missing and we are to investigate the disappearance, rescue the dwarves, and escort them to Mendev. The envoy has been captured by Razmiri priests and are have possibly been brought to the Gray Revelation Inn for questioning. Temel Passad will provide a boat and join our journey together with 2 dwarves who will replace the envoys if we fail our mission.

While the letter is being passed around, Temel and two dwarves enter the room and introduce themselves. Temel tells us about the specifics of the mission and the party asks some additional questions about Razmiran and the missing dwarves. We then skip to our trip on the boat which is uneventful until we enter Razmiri waters. Here one of the many arguments between Temel and the dwarves ensues. Temel wants to dock in Xer to pay the toll while dwarven merchant Metella Rauger thinks it’s best to avoid any possibility of the boat being searched. Temel hands over the toll amount to Kledde who then jokingly mentions to never having received any money. He is then pushed overboard by Idran who murmurs something about showing respect for the teachings of Sarenrae. The rest of the group discusses the possilibities and comes to the conclusion that even if we would pay the toll, chances are high that we’re stopped by a faith barge anyway. So the order is given to just continue without docking in Xer.

And sure enough, a bit later our ship is beset by one of the faith barges who order us to halt for inspection. As the barge draws near the character all take cover just in case crossbow bolts start flying. When the barge has almost reached us, Idran summons fire to burn their sails. The Razmiri thugs start shooting at us with their crossbows but no one gets hurt as we put more and more distance between both ships and escape unharmed. Shortly after the encounter with the faith barge, Temel, Metella, and Amauhak approach the party to see what kind of a cover story they’re going to use when they arrive at the inn. Seeing that both Idran and Kledde are of the faith of Sarenrae, at first the suggestion of religious pilgrims seems feasible but seeing how Razmiran is not exactly open to other religions, the travelling merchant cover story start to seem more plausible.

In the midst of this discussion, suddenly a river drake jumps from the water, throws a snake onto the deck, and attacks. Henricus is able to react immediately and fires a crossbow bolt into the drake for massive damage as Kledde’s eidolon Glynlissa charges into close combat. The ninja Reiko tumbles in between the drake and the snake and flanks the drake, dealing so much damage, it slumps overboard back into the water. Glynlissa then quickly disposes of the snake killing it with one blow. Reiko then handles the snake’s fangs to withdraw some of its poison. Once that’s done, Henricus stuffs the snake in his backpack to hone his taxidermy skills on at a later date. Kledde then discovers the drake’s nest and some gold and gems which Glynlissa picks up for him.

The drake has only barely fallen back into the water as the arguing continues. Both Temel and Metella come up with a trade offer for the party to consider. Of course it’s not possible to strike a deal with both merchants so in the end the party chooses the dwarven deal as the prospect of additional military might is rather important in Mendev. Henricus talks to Metella afterwards to provide the contact data of Gloriana Morilla, and the information that the dwarven military forces should be arranged through an esteemed member of the Pathfinder Society such as herself.

When the boat finally arrives at the Inn, there’s still discussions going on about the cover story. There’s also talk about splitting the party and going with both stories but in the end the merchant story is the one that’s chosen. The party encounters a mute stable boy who’s questioned about his affliction by Idran. Rosh, the stable boy, then shows us into the inn and introduces the party to the sisters Grymble. Junius and Henricus treat themselves to a lavish bed room, while the rest of the group take the common rooms. Henricus then asks for a bath while they wait for the food to be served. Meanwhile Idran and Kledde are taking a look outside and discover that Rosh and one of the horses are missing. Kledde then finds a holy symbol of Torag giving them a strong feeling that the dwarven diplomats might indeed be held here. Kledde also discovers that the unruly mare in the stable is an illusion.

After having eaten, Idran and Kledde inform the rest of the group and they decide to check out the stables in more detail. They decide to wait for the sisters to head to their room, then barricade their door. When the enter the stall with the illusionary horse, debris falls from the ceiling and Idran needs to heal everyone. When everyone has recovered, the debris is cleared out and the group finds a trapdoor leading into a basement. Reiko takes the lead in the subterranean complex, listening at the doors, checking them for traps and taking point. Henricus and Idran cover the rear. By searching a number of the outlying rooms, the party discovers the clothing of 3 dwarves and a host of crates with clothing and items from many different cultures. They also discover barrels of ale and a trap door leading to the Inn’s bathroom. Then the group enters a corridor with doors on either side of the room which end up being cells. The keys to the cells are in plain view on a small table.

The three dwarven diplomats are found manacled to the walls of the cell, severely malnourished and dehydrated. Their clothing is returned and Rakuska Ingardam recounts the story of their capture and interrogations by a Razmiri priest called Holy Ahendile. Henricus insists that they leave immediately as the stable boy is most likely underway with reinforcements. When they return to the stables, they notice that the missing horse has returned. Reiko checks the courtyard and sees several individuals head towards the stables as the mute boy spots her and waves. Idran gathers the horses and ties some straw to their tails. The moment the Razmiri reach the stable door, the straw is lit on fire and the horses storm out the doors knocking over one of the individuals.   Henricus tries to hit the cleric with a crossbow bolt but misses. Glynlissa charges out of the barn towards the cleric while Junius casts grease on the roof, making the Razmiri faithful tumble to the ground.

While Kledde and Henricus provide covering fire, Idran casts burning hands. The Razmiri cleric breaks away from combat to cast ray of enfeeblement on Glynlissa but to no avail as she’s killed by the eidolon a few moments later. The guards also drop either by crossbow bolt or by an eagle summoned by Junius. As Reiko finishes off the last guard, the party escorts the dwarven diplomats back to the ship. Idran asks what is to be done with the sisters but the group decides to let them be. Arriving safely in Mendev a while later Henricus and the other pathfinders successfully completed another mission.