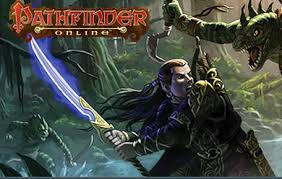 Kickstarter is getting hotter and hotter in the industry. And now Paizo Publishing and Goblinworks Inc. jump on the bandwagon as well.

Since Paizo’s announcement of Pathfinder Online back in December, we’ve all been quietly waiting for a first glimpse of what this new MMO would look like. It seems the next step for Goblinworks Inc. is to raise enough money to develop a technology demo in order to get more investors interested in the Pathfinder Online project.

So if it’s not the full game you’re backing, what’s in it for you ?

Well the pledge rewards go from a pdf over a Goblinworks t-shirt all the way up to dinner and a game with some of the Paizo and Goblinworks crew.

The interesting part for me is the Thornkeep book of which you can see a cover mock up below. 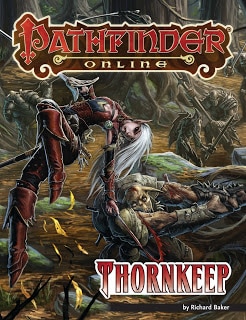 Thornkeep will be a 64-page book detailing the Thornkeep and surrounding area in the River Kingdoms. The first part of the book will be all official Pathfinder lore, the second half of the book presents a behind-the-scenes look at the creation of Pathfinder Online.

Lisa Stevens, Paizo’s CEO, commented on the forums that the only sure way to get a hardcopy of the book, would be to support the Kickstarter. Paizo has to print a certain number of books, if they are all gone through the kickstarter project, only a pdf will be available afterwards. If not, I assume they’ll sell the remaining stock.