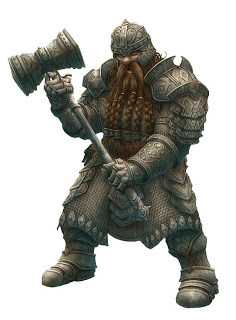 Dolgrin Rogargun comes from a very traditional and religious family that traces its ancestry to a legendary dwarven smith known as the Blackforge. With such an ancestor, worship of Torag the Father of Creation was self-evident. Growing up in Rolgrimmdur combat, tactics, and engineering were as much part of the program as rigorous physical exercise. At age 40 his gladdinggarsun sent him into the bowels of the Darklands, looking for the gladdringgar of his great-grandfather Grimm. It took him three months and several encounters with his hated duergar kin to locate Grimm’s name-rune and chisel his own to the right of it.

Upon his return in Rolgrimmdur, his succesful rite of passage was celebrated and Dolgrin received the family heirloom, a masterwork warhammer crafted by the Blackforge himself. The warhammer’s head depicts an adamantine inlay of Blackforge’s and Torag’s sigils and has been wielded in countless battles over the centuries. In addition to his warhammer, Dolgrin also carries the traditional dorn-dergar, a 10-foot-long chain weighted at the end by a fist-sized metal ball.

His rite of passage complete, general Hayla Sagginsdottir sent Dolgrin to Five Kings Mountain’s capital Highhelm as a mercenary to help reinforce the battlements and share his knowledge of siege engines. Ten years later he was reassigned to the city of Kovlar for more mercenary work, guarding the Anviler’s Guild’s shipments towards Highhelm.

Halfway into this assignment he has been recalled to Rolgrimmdur. His new mission: travel to Absalom to look for trade and mercenary opportunities and to establish a link with dwarves residing in the city at the centre of the world. This presents quite a challenge to Dolgrin since his connection with the earth and its stones is so great that he distrusts any means of transport besides his own two legs. He refuses to use mounts due to a ‘complete lack of control over one’s movements’, and even riding along in a wagon has him shifting from one side to the other uncomfortably. The true test of his resolve he will face in Andoran’s capital city of Almas, where a ship awaits him.