by Ralph on February 1, 2012
RPG
28
3
previous article
Collection update and goals 2012
next article
Pathfinder Campaign - Session 2 : All aboard

You could read about my character write-up for Henricus Janovius Corentyn in an earlier post. That was just a rough idea for a character and DM Koen and I fleshed things out a bit more during session 1. 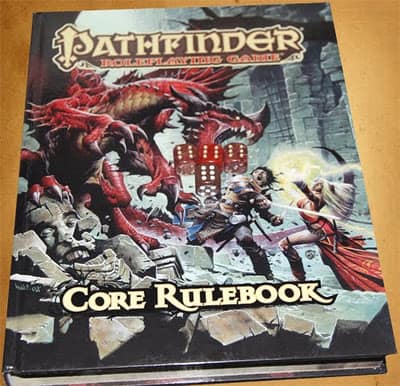 Since I lost pretty much all of my dice somewhere in the massive pile of books and junk that is my room, I bought some new d6 right before the session. As you can see in the above picture they looked very promising.

Race will be Human. In the Pathfinder world Golarion, the character will be of Taldan descent.

Being human gives me a +2 to an ability score, in my case that will be Charisma which becomes 16 (+3). It will also give me a bonus feat and an extra skill rank at 1st level and every level afterwards.

I will be going for a multiclass character with levels in Rogue, Bard, and Ranger. First level and favorite class will be Rogue. This gives me a d8 of hitpoints which are full since it’s 1st level plus 1 hitpoint for my Constitution modifier for a total of 9 HP. At 1st level Rogues also gain Trapfinding and Sneak Attack +1D6 as class features. There is no Base Attack bonus yet but I do get a +2 reflex save.

Being a rogue gives me a lot of class skills and 8 skill points to start with. In addition I also get 2 extra skill points for my Intelligence modifier and an extra skill point for being Human. I will also add 1 more skill point for a level in my favorite class for a total of 12. I chose to take a rank in the following skills : Acrobatics, Appraise, Bluff, Craft (Drawing/Painting), Diplomacy, Disable Device, Knowledge (Local), Knowledge (Nobility), Perception, Profession (Taxidermist), Sleight of Hand, and Stealth.

Let’s first start with a list of interesting feats before I make my choice. I’ll be looking for fluff and dexterity based or ranged combat feats.

So many interesting feats and since I’m not a fighter character I’ll probably miss out on most of them. The ones I’ve chosen for the 1st level are Improved Initiative, since I want to be able to get out of danger as soon as possible, and Noble Scion (Patron of Lore), since that fits with the concept of the character.

Languages Since Henricus has an Intelligence of 14, he’ll start off with 2 additional languages in which he’s versed. The languages I have picked are Taldan (yes it’s Taldan, not Common), Kelish (know your enemies), and Skald (due to the Ulfen Guard).

Equipment Since Henricus is leaving Oppara to travel to Absalom and Corentyn, the dungeon master ruled that his equipment would be limited to what his horse can carry. Moneywise there were not too many restrictions, since Henricus is of noble birth. Henricus will also be carrying around a good amount of cash in order for him to maintain the luxurious life he’s used to. The equipment choices are made from a character point of view and Henricus is not at all planning a life of adventure, something that might (quite literally) come to bite him in the ass. 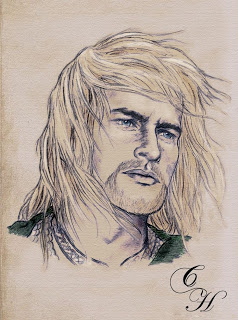 A selfportrait by Henricus Janovius Corentyn including his signature in which you’ll recognize the C of Corentyn and the J and H of his first names. (Disclaimer: Credit goes to Breogan at DeviantArt for drawing this. I just photoshopped the initials on it to make it look like a selfportrait.)

The Corentyn family claims to be direct descendants from the noble family that ruled Corentyn in its founding years. They have been on the forefront of Taldan politics for decades and are strong proponents for a return to the Taldor of old. To this end, Theodric wants his children in places where they are useful to him and Taldor. Their youth was spent mainly at the Corentyn mansions where they were raised by a host of personal tutors and staff. The Corentyn family resides in Oppara’s West Park in a big mansion surrounded by a park. The Corentyn family also owns several buildings in Oppara as well as large farms and areas of hunting.

The story so far