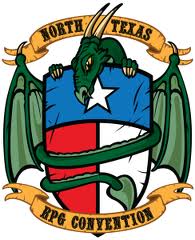 Well, if there’s one convention I would love to go to, it’s this one. The North Texas RPG convention 2012 is old school gaming heaven. With an allstar cast the likes of Frank Mentzer, James Ward, Erol Otus, Sandy Petersen, Jeff Dee, Jennell Jacquays, Steve Winter, Dennis Sustare, Diesel LaForce, Jason Braun, Tim Kask, and the complete crew of Frog God Games attending, running and playing in games, this is a must-attend for all with some love for the TSR days.

Besides gaming the con also awards the Three Castles award which was won by Kevin Crawford’s Stars without numbers, has a number of seminars (Origins of Call of Cthulhu w/ Sandy Petersen & Steve Marsh, Origins of 2E AD&D with Zeb Cook & Steve Winter, Art Seminar with Erol Otus, Dave LaForce, Jeff Dee, Jennell Jaquays & Jason Braun), holds a raffle in which you can win a lot of nice items (Dragon Magazine # 1, Dungeon Magazine #1, Castle Zagyg – Upper Works, DCC #51 Castle Whiterock boxed set (in shrink), and even a free trip to NTRPGCon 2013), and an auction where the super rare Greyhawk goldenrod sheets were auctioned off for $1350.

Games played amongst many others were Call of Cthulhu by Sandy Petersen, OD&D by Frank Mentzer and Dennis Sustare, Paranoia by Ben Burns, Metamorphosis Alpha by Jim Ward, Castle Greyhawk by Allan Grohe, Runequest by Jennell Jacquays, Swords & Wizardry by Bill Webb and Matt Finch, Cavemaster by Jeff Dee, a Chainmail scenario “The Battle of Lonely Mountain”, Circus Maximus and much much more.

One of the nice features was an allstar game in which attendees could win a spot through the auction and raffle. The players included James M Ward, Steve Winter, Jennell Jaquays, Tim Kask, Sandy Petersen, and Frank Mentzer. Below you can find their adventures.

Below a question and answer session on the origins of Call of Cthulhu with Sandy Petersen and Steve Marsh, followed by The good old days with Jim Ward, Frank Mentzer, and Tim Kask. Then there’s a seminar about the origins of AD&D with Steve Winter and Zeb Cook, and Gonzo Gaming with Michael Curtis and Tim Kask.

by Ralph on October 24, 2014
On Sunday I returned to Spiel 2014 to pick up my copy of Shadows of Brimstone. I located the pick-up point quite fast but underestimated the size of the reward a little bit. So I ended up hauling a big carton box back to the car, minutes after I had [...]
Comments
Leave a reply