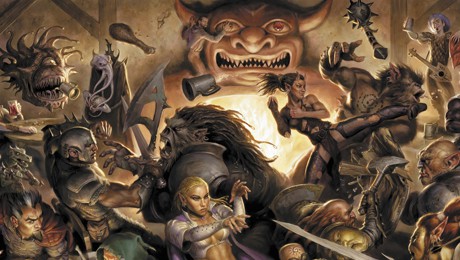 ears ago Dungeons & Dragons the movie hit movie theaters and … well, it wasn’t exactly a succes story. I remember being incredibly pissed off when I saw the movie. I was big into dwarves at the time. Like all my characters were dwarves. They were the coolest thing in the world. Then I met Elwood the dwarf. I’ve never forgiven the producers for how he was depicting the coolest race ever. The movie was followed by Wrath of the Dragon God (2005) and The Book of Vile Darkness (2012) which, looking at the IMDB ratings, were equally successful.

The announcement reflects the resolution of Hasbro and Wizards of the Coast LLC’s complaint against Sweetpea Entertainment, Inc. and Sweetpea BVI, Ltd. and the counterclaims filed by Sweetpea against Hasbro in May 2013 related to the Dungeons & Dragon brand.

Hasbro’s Brian Goldner and Stephen Davis, Courtney Solomon and Allan Zeman of Sweetpea Entertainment, and Roy Lee (“The LEGO Movie,” “How to Train Your Dragon”) are attached as producers, with a script already written by David Leslie Johnson (“The Conjuring 2,” “Wrath of the Titans”).

“We are so excited about bringing the world of Dungeons & Dragons to life on the big screen,” said Greg Silverman, President, Creative Development and Worldwide Production, Warner Bros. Pictures. “This is far and away the most well-known brand in fantasy, which is the genre that drives the most passionate film followings. D&D has endless creative possibilities, giving our filmmakers immense opportunities to delight and thrill both fans and moviegoers new to the property.”

“This is such an enormous opportunity to bring the rich fantasy setting of the Forgotten Realms to life and, together with the creative powerhouse of Warner Bros., use movies to tell the stories that have enchanted passionate D&D fans for decades,” said Stephen Davis, Executive Vice President and Chief Content Officer of Hasbro, Inc. “D&D is the role-playing game that started it all and now we have the opportunity to ignite a franchise for its legions of avid fans in a way never done before.”

Flight from Shadow, a Wheel of Time short film

by Ralph on February 3, 2014
WHEEL OF TIME fan movie “Flight From Shadow” chronicles the events in the “Four Kings in Shadow” chapter from The Eye of the World, the first book of Robert Jordan’s bestselling series. After narrowly escaping an ambush in [...]

The Great Kingdom, a D&D documentary

by Ralph on January 29, 2014
Here’s the first look at the documentary THE GREAT KINGDOM, which tells the story of the creation of Dungeons & Dragons, how its success affected the lives and families of those who created the game. Follow the Great Kingdom on Facebook

Lovecraft – Fear of the unknown documentary

by Ralph on April 26, 2013
I recently discovered Lovecraft – Fear of the unknown, a 2008 documentary about the life and works of HP Lovecraft. Featured in the documentary are luminaries such as Ramsey Campbell, ST Joshi, Robert M. Price, and Guillermo del Toro. It can [...]
comments
Leave a reply