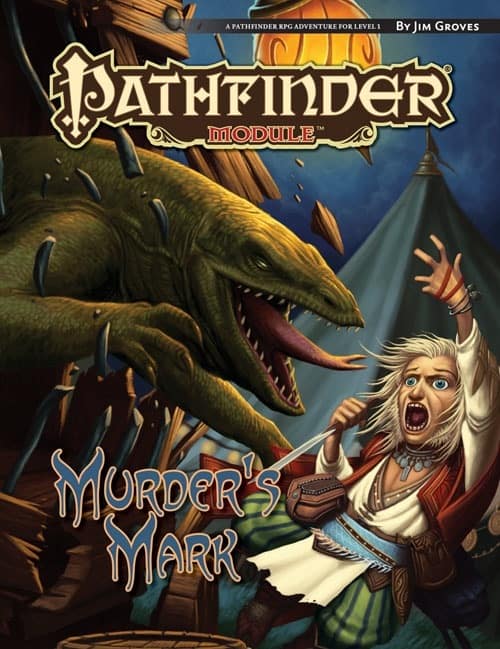 When the Umbra Carnival rolls into Ilsurian, run by a much-maligned Varisian ethnic group, the local thieves guild sees this as an opportunity to go on a thieving and murdering spree, leaving the circus to take the blame.

Murder's Mark is an amazing 1st level adventure for groups that enjoy investigating mysteries. It's relatively combat light and provides plenty of opportunities for roleplay. The carnival provides a very fun atmosphere and I would highly recommend to make the most of exploring all the different tents and games in the early stages of the story. At the same time the scenario also offers the opportunity to include the racial tensions between different ethnic groups which you can play up or down as much as your players are comfortable with.

Murder’s Mark by Jim Groves is an adventure of mystery, illusion, and mob justice for 1st-level characters, written for the Pathfinder 1E roleplaying game and compatible with the Dungeons & Dragons 3,5 ruleset. The module was published by Paizo Publishing in 2012. The 32-page saddle stitched booklet contains the Murder’s Mark adventure, an appendix featuring the Panotti monster, and a gazetteer of the travelling Umbra Carnival.

While I like the cover art of Dave Allsop, it feels like it’s a close-up of a much larger scene. In this case I would have loved to have seen more of that scene. The cover art showcases an encounter at the Umbra Carnival but I would have loved to have seen a bit more of the Carnival itself. I’m a big sucker for atmosphere and one tent in the background is a bit of a missed opportunity for an adventure module that oozes with atmosphere.

I like the pre-published cover artwork to the left a lot more for its great connection to the title of the module although it wouldn’t have been a fitting cover for the module itself.

The interior art is mainly reserved for characters. I especially like the full-body pieces that give you a lot of options to describe the characters in your story.

The two remaining interior art pieces, a scene from the carnival games and an encounter in Braeton Manor, have a softer style than the more pronounced and detailed work of Wayne Reynolds whose style I enjoy a lot more.

The 4 maps for this module by Jared Blando can be found on the module’s inside covers and are absolutely top notch! The level of detail in these maps easily covers any room descriptions you might need to give your players a good feel for the locations they’re in.

The map in the Umbra Carnival appendix gives a more zoomed out look of the complete carnival grounds. It would have been great if the Midway section on that map would have matched the Midway detail map on the inside cover but now I’m being very nitpicky.

Murder’s Mark is a beautifully produced adventure module as we’ve come to expect from one of the big names in the industry.

The module has a two-column layout with clear titles, encounter levels, monster stats, art, different-colored read-aloud sections, and side bars all expertly mixed in. I especially love the implementation of the ‘Where on Golarion’ sidebar that shows where on the map the adventure is taking place.

At first I found the inclusion of the founding of Ilsurian in the Adventure Background a bit too much as it has nothing to do with the actual adventure. However, it does explain why a village of Chelish descendants sits in the middle of Varisia and is great information if you want to include the racial tensions with the Varisians in your game.

The read-aloud text is clear and concise. I couldn’t find typo’s which is to be expected with editors and editiorial assistants on staff. The murder scenes have a ‘What really happened’ section, and the necessary skill check DCs to find the clues, or in this case question the clues.

Murder’s Mark features 19 encounters of which half have a Challenge Rating of 0,5 and 1. This leaves another half of the encounters with Challenge Ratings of 2 and 3. This might seem a bit challenging for a 1st level adventure but makes sense for a crunchy game like Pathfinder where the designers have to account for players with very optimized character builds. It does pose challenges for groups like mine that don’t focus so much on the mechanical side of the game. These encounters are definitely not all combat-related by the way and even a number of the combat encounters can be resolved through peaceful means.

The stats for most encounters are provided. Only for the monitor lizard and skulk creatures the module refers to the Pathfinder Bestiary and Bestiary 2 respectively. That’s a pity although easily remedied by looking up the stats in the online SRD. What’s really a shame though is that the description of The All-Seeing Hajeck refers you to Pathfinder Module The Harrowing. I understand that she plays a pivotal role in that adventure but who doesn’t want to take their character to the fortune teller? The fortune telling I did for the character of my group, using the Harrow Deck, was one of the most fun moments of the story for me as the GM.

Appendix 1 features the Panotti, a humanoid creature with large elephantine ears. The creature is based on real-world mythology and a great addition to the freak show part of the Umbra Carnival.

Appendix 2 provides a gazetteer of the Umbra Carnival with its own map and ‘village’ stats. While there is certainly a good amount of information presented here, I would have loved a stronger focus on the actual characters being part of this Carnival. This adventure module shines through its atmosphere and a number of evocative crew member descriptions would have certainly augmented that even more.

The local thieves guild sees the arrival of the Umbra Carnival as a great opportunity to commit crimes and blame them on a much-maligned ethnic group.

The Murder’s Mark module is split into 6 parts. The first part describes the arrival of the Umbra Carnival. I would highly recommend to make the most of this part of the story. Heading over to the Carnival, playing the games, and watching the show can be both very atmospheric and lots of fun.

The second part describes the facts of the murder of Archavin Walder, the investigation of the crime scene, and of Archavin’s shop The Locked Box. In the third part another murder occurs, this time local priestess Sister Woodmere meets her end. Another murder scene investigation is required and the racial tension can be built up during this part with villagers and the circus crew almost coming to blows. Meeting the suspect of the crime, the sfinx Jherizhana, is also likely to happen during these parts.

In the fourth part local town drunk Filton Legg is murdered. It is this crime that will provide a big clue for the players to solving the mystery, even if it’s not completely how they are envisioning it. Part five details the encounter with one of the Thieves Guild’s leaders and clarifies the plot. The final part then consists of further cleaning out the remainder of the Guild.

In any of the parts you can give hints towards the racial tensions between the ethnic groups, but especially in part three this plot point is driven to its peak.

As the GM you might want to keep a number of things in mind if you plan to run this adventure:

Murder’s Mark in my own campaign

You can purchase the products mentioned in this review through below affiliate links (as an Amazon Associate I earn from qualifying purchases):

by Ralph on June 19, 2019
Mini Dungeon 38 The Spinner’s Hole is a short dungeoncrawl adventure for 4 1st level characters. The module was published in pdf format by AAW Games for both the Pathfinder and D&D 5E ruleset.  Art The cover artwork features the actual [...]