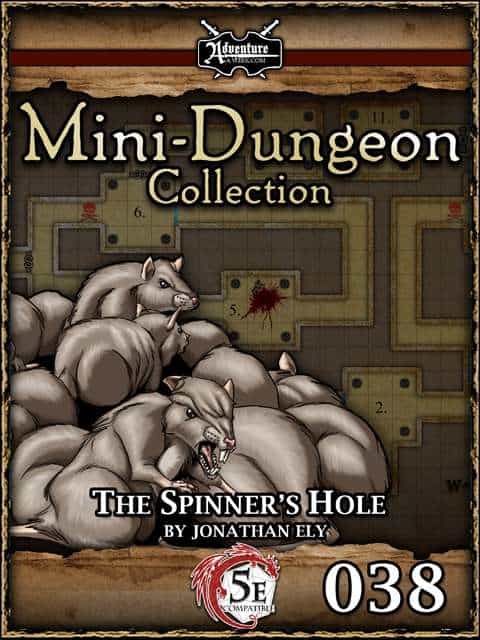 A lair long known for harboring giant spiders, this ancient dungeon is tolerated and periodically invaded for the valuable silk that is produced within.

A short and simple dungeon with an interesting challenge for the players that you can run with minimal GM preparation.

Mini-Dungeon 38 The Spinner’s Hole is a short dungeoncrawl adventure for 4 1st level characters. The module was published in pdf format by AAW Games for both the Pathfinder and D&D 5E ruleset.

The cover artwork features the actual dungeon cartography in the background with a pack of rats grabbing the eye in the front. While the art itself isn’t bad, it would make more sense to have a spider on the cover since the story is actually about spiders. In fact, there’s no rats to be found in the dungeon at all.

While this cover artwork is visible on DriveThruRPG, it’s not included in the 2 page pdf. The separate elements (rat art and dungeon map) are however repeated in the pdf in separate locations.

The cartography is a full-color piece which looks very professional, with a clear color distinction between the actual dungeon locations and the parchment background.

It’s a very simple dungeon location with 11 rooms of which 9 are pretty much identical 3×3 square rooms supported by four pillars.

On the whole the pdf is professionally done. The light gray background contrasts great with the cartography color scheme and is lighter in color within the page margins so it doesn’t conflict with the readability of the text.

The pdf has links to the SRD for certain spells, traps and monsters which is a great addition. The only problem with that of course, is if the SRD decides to change its page structure so the links don’t work anymore, which was the case for the monsters. It only takes a few extra mouse clicks to get to the correct page, but that’s the risk of including links in the pdf. The comfort of being able to use those links though, easily outweighs that risk in my opinion.

The writing is concise and to the point. There’s two paragraphs explaining the story, followed by the room descriptions. I couldn’t find any typo’s or editing issues. Due to the fact that a lot of the rooms are pretty much identical, there is a good number of repetition in the descriptions though.

The party is hired by the weavers of Spinner’s Folly to assist in their harvest of spider silk from a nearby dungeon. The adventures are, however, not allowed to harm the spiders in any way.

I really enjoyed the premise that the party is not supposed to harm the dungeon denizens. I think it’s a great way to challenge your player’s creativity. I don’t have a group that really enjoys dungeoncrawling but this challenge interested them nonetheless and gave them the opportunity to come up with a great plan to avoid having to deal with the giant spiders.

GM preparation for this adventure module is minimal. Just reading through the two pages once should be sufficient for most GMs to run this adventure.

A few things to keep in mind which came up during play:

You can purchase The Spinner’s Hole at DriveThruRPG for $0,99. Full disclosure: the links below are affiliate links. If you purchase on DriveThruRPG through them, I will receive a small commission. It’s a great way to support the website as it enables me to purchase more pdfs using my earned commission.

Purchase The Spinner’s Hole for the Pathfinder ruleset.

Purchase The Spinner’s Hole for the D&D 5E ruleset.