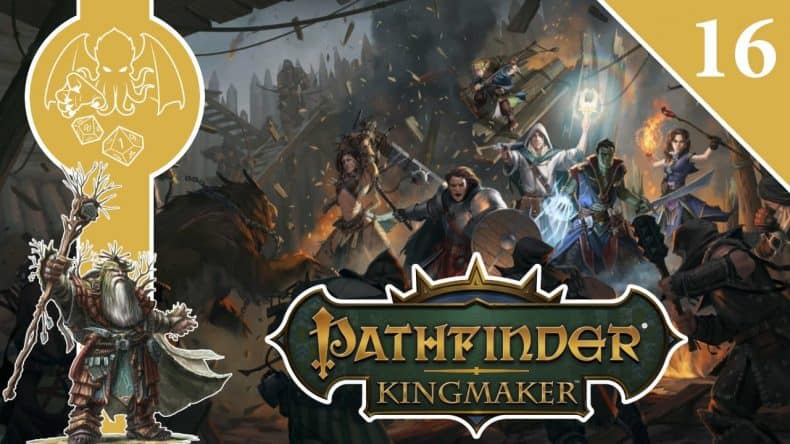 In my let’s play of Pathfinder Kingmaker Episode 16 Grenn tries to balance his duties to the barony with his adventuring lifestyle. Not something that is always easy. As much as he wants to go exploring, he needs to take into account that certain events happen which require his immediate attention.

During a random encounter with some ferocious troll hounds I found out that it was time to stock up on acid and alchemist fire potions as anything with troll in its name seems to regenerate hitpoints.

A new region called the Old Mesa was discovered. We fight off a greater werewolf that just attacked a camp of travelers. Unfortunately we couldn’t rescue the travelers but the werewolf won’t be plagueing our lands anymore.

After that encounter it was time to explore a Glade in the Wilderness. In this glade the party fights a whole bunch of wolves of Silent’s pack. We can decorate quite a lot of our palace with wolf pelts now.

While we’re following the Skunk river we come upon the Overgrown Pool and solve an issue between a nixie and a number of lumbermen. From there we visit the Ruined Watchtower. This is quite a sizeable area that provides us with many encounters as the landscape becomes more and more dwarven. Grenn also finds a new partymember called Ekundayo.

When it comes to Kingdom Management Tristian returned succesfully from trade tax negotiations with the merchant’s guild. The loophole in our tax laws was closed and the barony gained 3 Loyalty. Tristian is then immediately sent out again to deal with monstrous spiders flooding the barony. He also succesfully deals with the spider problem and the barony gains 1 Community, 4 Loyalty, and 1 Divine.

General Amiri implents patrols and succesfully completes the Troubled Lands event. She is then sent out immediately to deal with the Bandit’s Outrage event.

In the meanwhile a tavern is built in Dhorne.

Tubebuddy is a browser extention that integrates directly into Youtube to help you run your channel with ease! Download it for FREE: https://www.tubebuddy.com/RPGames