by Ralph on January 11, 2019
Boardgames
150
1
previous article
Which RPG would you like to see me play?
next article
Another Hyperspace Test Pilot demo at Spelhuis 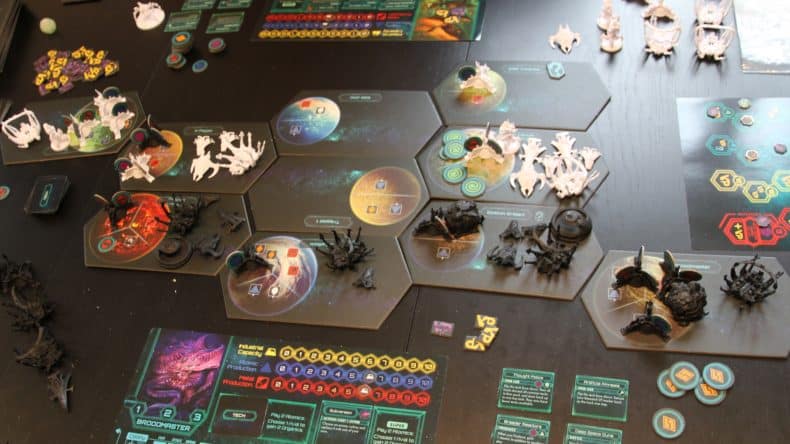 On the 14th of December I visited the local Spelhuis gaming store in Zonhoven to demo the upcoming Hyperspace game. Hyperspace is a space exploration game by Petersen Games coming to Kickstarter in Januari 2019.

My buddy Carsten and I played a two-player game where he took the role of the Fungi while I played the Broodmaster. It was a very close game with Broodmaster reaching 15 points first and ending the game. Choosing to end the game however, doesn’t necessarily mean that you win as I found out. After calculating the total Victory Points (including hypertokens, Colonies, Starbases and Victory Point on Secret cards) Broodmaster ended up with 33 Victory Points, with Fungi narrowly beating them with 35 Victory Points.

During the game I noticed that I had to use the Produce action a lot more than in a previous 3 player game. That was a very noticeable difference between those two games. Due to a number of secrets I had given to Carsten because of the Broodmaster ability, he had no shortage of resources at all, in fact he was sitting on a huge pile of Organics by the end of the game.

“I liked the quid pro quo, because I’m doing this, my opponents gets this. I like that. That is very nice because a lot of strategy games stop being interesting to me when there’s a huge shift in the power balance and all of a sudden you have no chance of getting anywhere. I also like the miniatures, especially the unique ones, they look really, really nice.”

Another noticeable difference was the fact that not all the colonies were even placed on the board because both players played an aggressive game from the start. We didn’t wait for the Probe and Research tracks to be finished before starting battling.

Fungi wasn’t able to even reach the third spot on the Probe track due to Broodmaster quickly exploring all tiles and foregoing building up colonies and ships to do that. This effectively halted Fungi’s drone ability in an early phase. Carsten got lucky though drawing a secret card which allowed him to place another space tile which also counted on the Probe track so he was able to advance to the third spot after all. After the game he commented that he didn’t like the fact that you could stop a player from advancing on those tracks.

Carsten enjoyed the game and liked the design. He thought the look and feel of the races and their special abilities are very interesting. He felt that having 20 different races in the game is nice as long as long as playing them doesn’t feel the same. He also thought that Hyperspace being a competitive strategy game and having a different space layout every time coupled with the different races, replayability shouldn’t be any issue.
Another great thing was the fact that even if you lose a battle, it doesn’t take long to build back up.

As far as minor criticisms go, the token size, especially for the organic token, slotting them into the colonies slots felt fiddly but having the ability to slot the tokens into the colony is a great idea to keep the overview of resources. The tiles could have been a bit bigger. For large battles with lots of ships, things tend to get a bit cluttered. It would have been great if all the ships would have been on a foot like the Hateship, so they would all hover over the board instead of just lying on it. And finally, the weakness of the Fungi didn’t really feel like a weakness.

Please visit the Petersen Games website to get an overview of the different races that will be available in the game.

And if you’re looking for some boardgames, visit the Spelhuis (web)shop and support your local friendly gaming store.