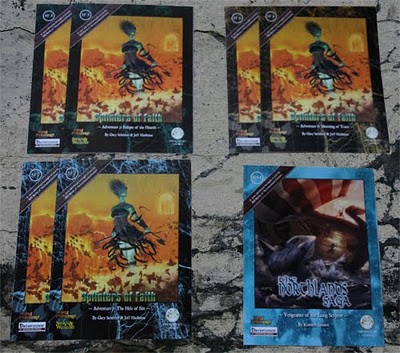 I have received some new stuff for my Frog God Games collection.

Splinters of Faith is a collection of 10 adventures that can be played individually or as a complete campaign. A grave robber has restored a death-cult leader to life and evil spreads across the land. The characters will have to visit several temples and shrines to look for pieces of the Scepter of Faiths, the only way to destroy this evil.

The Northlands Saga is also planned as a collection of 10 adventures for both the Swords &amp; Wizardry and Pathfinder system. The first adventure, Vengeance of the Long Serpent,  takes the characters to the frozen north to face a reawakened dark god and his cult.