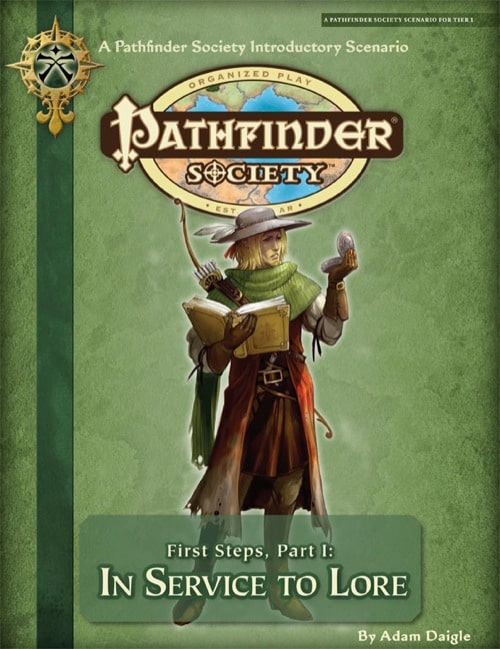 First Steps Part 1 : In service to lore is a Pathfinder Society Organized Play module for 1st level characters. The module was written by Adam Daigle and introduced in the 3rd season of Organized Play as part of an introductory trilogy of adventures together with First Steps Part 2 : To delve the dungeon deep and First Steps Part 3 : A vision of betrayal. This trilogy serves as an introduction to the Pathfinder Society and its different factions for both new characters and players, as characters who have participated in all three adventures will have had dealings with the Society’s major NPCs and can choose a faction at the conclusion of the trilogy. The module counts 24 pages including the cover, 2 chronicle sheets and 2 full page advertisements. Contributing artists are McLean Kendree, Ryan Portillo, Eva Widermann, and Kieran Yanner, while cartography duty was handled by Rob Lazzaretti and Sean MacDonald. This product was published by Paizo Publishing in pdf format only and is the only module of the trilogy which is currently still legal for Pathfinder Society Organized Play Season 5.

The cover artwork shows the image of a Pathfinder Agent holding a tome and a wayfinder on a grungy green background which is the staple for all Season 3 Pathfinder Society Organized Play adventures. The interior artwork is limited to 6 well-done portraits of notable NPCs, being mainly the Venture Captain Ambrus Valsin and the different Faction leaders the players come in contact with. The only non-Society portraits have been reserved for Auntie Baltwin and Ledford, the Halfling barbarian the player characters face in Act 5. Most artwork has appeared already in other Pathfinder releases which is quite understandable for a free product. Included is also a simple player handout showing the different tasks which need to be taken care of.

The cartography consists of five maps, three of them being encounter maps. The other two maps are a small map of the Isle of Kortos in the ‘Where on Golarion’ sidebar, and a full-page map of the different districts in the city of Absalom. The cartography for the Pathfinder Roleplaying Game is being done by some very talented people, Rob Lazzaretti being one of them and the maps are all full of little details. The map I liked less was Zarta’s Townhouse which seems to be done in a different style, a bit more cartoony than the other maps which have a more realistic feel. For the map of the Act 5, there’s a reference to the GameMastery Map Pack : Ambush Sites, which can be used for this encounter.

The adventure starts with a general introduction to being a Pathfinder and belonging to the Pathfinder Society, after which Ambrus Valsin, the Grand Lodge Venture-Captain, is introduced, as well as the different factions within the Society. The introduction also includes a sidebar on the The First Steps series and a ‘Where on Golarion’ sidebar, a feature that we see in many of the Pathfinder modules showing where on the world map the adventure is taking place. In the case of In service to lore the adventure takes place in Absalom, also known as the city at the center of the world. The sidebar also includes a reference to Pathfinder products where more information on the setting can be found, being the Guide to Absalom for this specific adventure. The introduction is followed by a short summary of the adventure and the setting of the stage in ‘Getting started’.

First Steps Part 1 : In service to lore is split up in five acts, four of which are short missions for some of the faction leaders of the Pathfinder Society. Act 1 : A favor for thieves brings the player characters to the Pickled Imp, the shop of Sczarni Faction Leader Guaril Karela in the Docks District. Karela asks the players to obtain a certain crate from an abandoned warehouse at the docks.  This mission consists of some roleplaying opportunities with Karela, the task to get into the warehouse, and lift the crate from its precarious position hovering over a hole in the floor. Inside of the warehouse there’s a combat with 3 dire rats which shouldn’t pose too much difficulties for the party. The adventure text offers several possibilities of getting to the crate, should the party lack in ideas.

Act 2 : A crusade of light is a mission for the Silver Crusade Faction Leader Ollysta Zadrian and is my favorite mission of the adventure as it provides lots of roleplaying opportunities. The mission consists of delivering a package of medicine to Auntie Baltwin’s Home for Recovery in the Eastgate district. The party is also tasked however to check if Auntie Baltwin’s Home is actually deserving of the Silver Crusade’s charity. The module offers the possibility for the players to pick up on rumours about Auntie Baltwin through the use of a Gather Information or Knowledge (Local) check. There are a few ways the party can discover Auntie Baltwin’s shady side, all described in the module. The adventure text also provides a detailed description of this NPC and how she acts, making it a great opportunity for the Dungeon Master to add flavour to this encounter.

Act 3 : Treasures of Osirion brings the characters to the home of Amenopheus, the Sapphire Sage, who’s the Osirion Faction Leader. This mission consists of the party going into a vault and solving a puzzle and was my least favorite of the missions. In the vault the players will find a basket, a jar, and three chests, one of which is an illusion. The basket, jar and one of the chests each have a trap. The basket contains a snake, the jar contains acid, and the chest has a trap that turns your skin blue. While this would be funny when you’re playing this adventure with young kids, I found it to be a bit of a lame trap. The different containers reveal a number of keys which eventually provide either a scepter that can open the vault door or a wand of knock that can accomplish the same thing.

Act 4 : A promise of dominance brings us to the Ivy District where Paracountess Zarta Dralneen, the leader of the Cheliax Faction, resides. Zarta is another great NPC for bringing flavour to the game. The box the party is supposed to pick up is in Dralneen’s bedroom. Her pet imp Kreuvus however also seems to want the content of the box and has been trashing the bedroom out of frustration of not being able to open it. The imp is being described as totally out of control so combat is very likely in this encounter. The group I played this adventure with solved this one without even damaging the imp.

Act 5 : Jumped pits the players against another 1st level party. Throughout the adventure the players had the possibility of noticing they were being watched. When they leave Dralneen’s townhouse, the road towards the Grand Lodge is blocked by a large amount of spectators watching some performers on the street. This forces the party into the smaller alleys which are the scene of the toughest encounter of the adventure. The opposing party consists of a barbarian, a cleric, a sorcerer, and a rogue and has the potential of crippling the player characters, if not worse. When I played the adventure we faced a strong hit from the barbarian, a full damage negative energy channel from the cleric and the sorcerer’s color spray spell. The Dungeon Master was kind enough to have the rogue circle around the party in such a way that we could defeat the others first after which the rogue ran away. This one could turn ugly easily.

Conclusion : The adventure does what it was set out to do, introduce new players and characters to the Pathfinder Society (Organised Play) and its factions. It has combat, a puzzle, and several great roleplaying possibilities. The last encounter is tough. A spell like color spray can potentially take a player character out of the complete combat which could be huge if it happens to be the fighter of the party. If the Dungeon Master goes through the trouble of familiarizing him or herself with the districts of Absalom which are used in this adventure, this could really be a great way of describing several key features on the way from one mission to the next and really immersing the players into the setting.

Download First Steps Part 1 : In service to lore for free here. The only requirement is that you register at the Paizo website.

An actual example of play can be found in my post about the Pathfinder Society Hasselt Event 1 – September 2013.

by Ralph on June 19, 2019
Mini Dungeon 38 The Spinner’s Hole is a short dungeoncrawl adventure for 4 1st level characters. The module was published in pdf format by AAW Games for both the Pathfinder and D&D 5E ruleset.  Art The cover artwork features the actual [...]
comments
Leave a reply