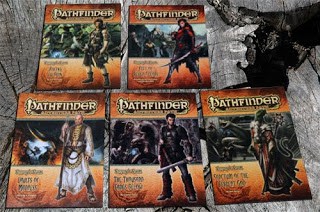 It’s discount season but instead of buying new shoes, which I definately need, I went to the local gaming store where nice discounts were being handed out and I got some Pathfinder books for this Pathfinder collection update. 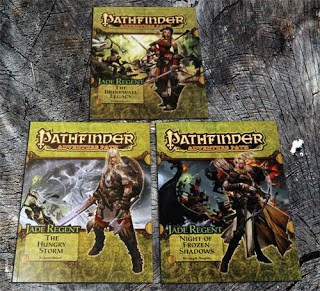 When a decades-old secret is exposed, an unassuming local tavern-owner and a close friend of the PCs discovers her birthright is to rule one of the ancient Dragon Empires of Tian Xia—the empire of Minkai. Yet the current ruler of this empire, the mysterious and increasingly cruel Jade Regent, has no intention of giving up his hold over the throne. In order to save Minkai from a would-be tyrant, the PCs must not only escort their friend from Varisia to Tian Xia, braving the frozen horrors of the Crown of the World, but must aid her in gaining the trust and support of a nation on the edge of anarchy.

These are the first three books of the Jade Regent Adventure Path. Still missing are Forest of Spirits, Tide of Honor, and The Empty Throne.

The Serpent’s Skull Adventure Path takes players from a shipwreck on the dangerous shores of the pirate island called Smuggler’s Shiv to the deep forests of the Mwangi Expanse, and into a lost city where an ancient and powerful race of serpentfolk seeks to resurrect their dead god.

These are five of the six books. Book 1, Souls for Smuggler’s Shiv, is still missing. 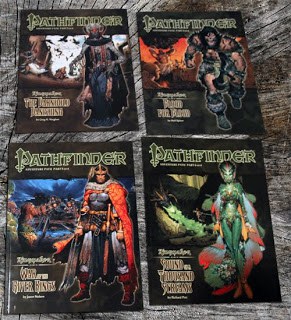 The Kingmaker Adventure Path takes the heroes from encounters with mysterious bandit lords and barbaric raiders through the trials and tribulations of developing and defending their new settlement in the notoriously lawless River Kingdoms. Yet when war comes to the Stolen Lands in earnest, it’s up the heroes to take up a mystical blade and stand tall against the horrors of man, beast, and strange creatures more dangerous than either…

These are the last four books of the Adventure Path. I’m still missing Stolen Land and River Runs Red.