Rise of the Runelords Character Forge 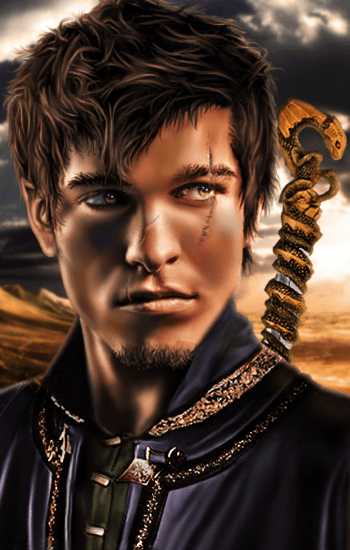 Eldon’s childhood was a haze of violent beatings and the marks on his body tell the tale. Ilsoari Gandethus found him in the Whipcrack district in Egorian, receiving the trashing of his life from one of the local slave traders. The old adventurer intervened and, after a short negotiation, purchased Eldon.

Back in Sandpoint, Eldon lived and studied in the Turandarok Academy. Although he had a knack for the magical arts, his roguish talents far outshone any field of study he pursued. He could spend days tinkering with locks until their mechanics held no more secrets for him. Another of his favorite pastimes was hiding in public spaces and observing the people passing by, honing his perception skills to a razor-sharp level.

Master Gandethus doted on him as he did with all his orphans. On his 18th birthday Eldon received the contract used to purchase him as a birthday gift. The name on that contract, Morvius Voralius, is branded in his memory, just as the letters MV are branded on his forearms.

Fully expecting Eldon to leave as soon as he reached adulthood, the old wizard was pleasantly surprised when his apprentice decided to stay. Although Eldon is fiercely loyal to his ‘master’, Ilsoari does worry about all the nights when his protege doesn’t come home. The job Eldon took at the Pixie’s Kitten keeps him awake most of the nights and brings him in contact with the less pleasant types of Sandpoint.

Always quick to find a solution to every problem, Forge has become known as the one who arranges things for you. For the right price of course. Cash or a favor-for-the-future. Both are fine. Both are fine indeed.

Forge dresses for the occasion, although he prefers dark clothing. “Black is too conspicuous”, he always says but dark greys, blues, purples, and browns are a staple among his clothes. He’s rarely seen with much skin exposed in order to hide the scars on his body. His forearms however, are always covered by dark cloth sleeves as he tries to forget the brands of his past.

GM Koen wanted us to take a look at a long list of questions to serve as inspiration for fleshing out our characters. Here you’ll find the interview with Forge.