Valeros was born on a quiet farm in Andoran, where he grew up listening to the tales of traveling merchants soldiers and dreaming of adventure and exploration. Though this longing only increased as he grew older, so too did the demands of helping his aging parents run the farm, and slowly but surely the mounting responsibilities of agricultural life quashed any possibility of travel or seeing the world. Finally, just a month before a marriage of convenience to a local farmer’s daughter could lock him into place (but not before he’d sampled a few of the joys of married life), Valeros came to the realization that the door to a storybook life of adventure was at last closing for good. Seized by a sudden, desperate need for a larger life than cattle and corn, Valeros packed quietly and left in the middle of the night with no more than a change of clothes, some pilfered food, and an old axe handle to discourage any ruffians who might seek to divest him of either. It was to become a theme that would follow him for the rest of his life. 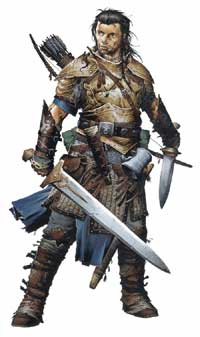 In the years since, Valeros has come a long way from the wide-eyed young man who sought only the joy of exploration (and maybe a pretty, worldly girl or three to regale with his stories). Life on the road, it seems, is much harder than the bards’ tales, and adult Valeros has the scars to prove it. Discovering himself to be a deft hand with a sword, Valeros quickly fell in with the rough-and-tumble mercenary crowd, there learning the dirtier, grittier facts of warfare. Though none could deny his prowess with a blade (or better yet, two), Valeros’s association with various mercenary groups never seemed to last for long. There was his time as a guard for the Aspis Consortium, which ended when certain shipments kept coming in light under Valeros’s watch (never mind that the exploited locals were dying for lack of grain, and only needed a little to make it through the winter). Then there was the stint as a freelance bounty hunter, during which Valeros discovered that it’s a lot easier to hunt down escaped murderers than it is to haul in a young woman on the run from a loveless marriage. And of course, there was the infamous incident with the Band of the Mauler, to which Valeros will only say that he was positive their leader had been crushed under that cave-in, or else he never would have touched the man’s wife.

In the end, after acting as hired muscle for dozens of different employers, Valeros finally realized that the only way to keep from getting blamed for things which weren’t his fault—not really—was to go into business for himself as an adventurer, traveling with those who properly appreciated him and letting those who didn’t fall by the wayside. And if some of those companions happen to be pretty women, such as a certain Varisian sorcerer or elven rogue, all the better.

While admittedly not the best at following orders, Valeros is an extremely talented two-blade fighter, easily earning his keep in any group through the tenacity and absolute fearlessness—some might say thoughtlessness—with which he flings himself into combat. Despite his reputation as a bruiser and scofflaw, Valeros has picked up a fair bit of education here and there during his travels, and can even read (something his “respectable” parents never learned to do). A worshiper of Cayden Cailean—the only god who properly understands the need for freedom in the common man’s existence—Valeros takes an easy-come, easy-go approach to life, wealth, and relationships. Though a fan of fine weapons and creature comforts, the only object he’s never without is the tankard on his belt (for you never know when someone might offer you a drink). Noble at heart, and fiercely loyal to those few who manage the considerable feat of establishing themselves in his affections, Valeros nevertheless hides such sentiments under a jaded and crass demeanor, frequently observing that there’s nothing better than “an evening of hard drinking and soft company.