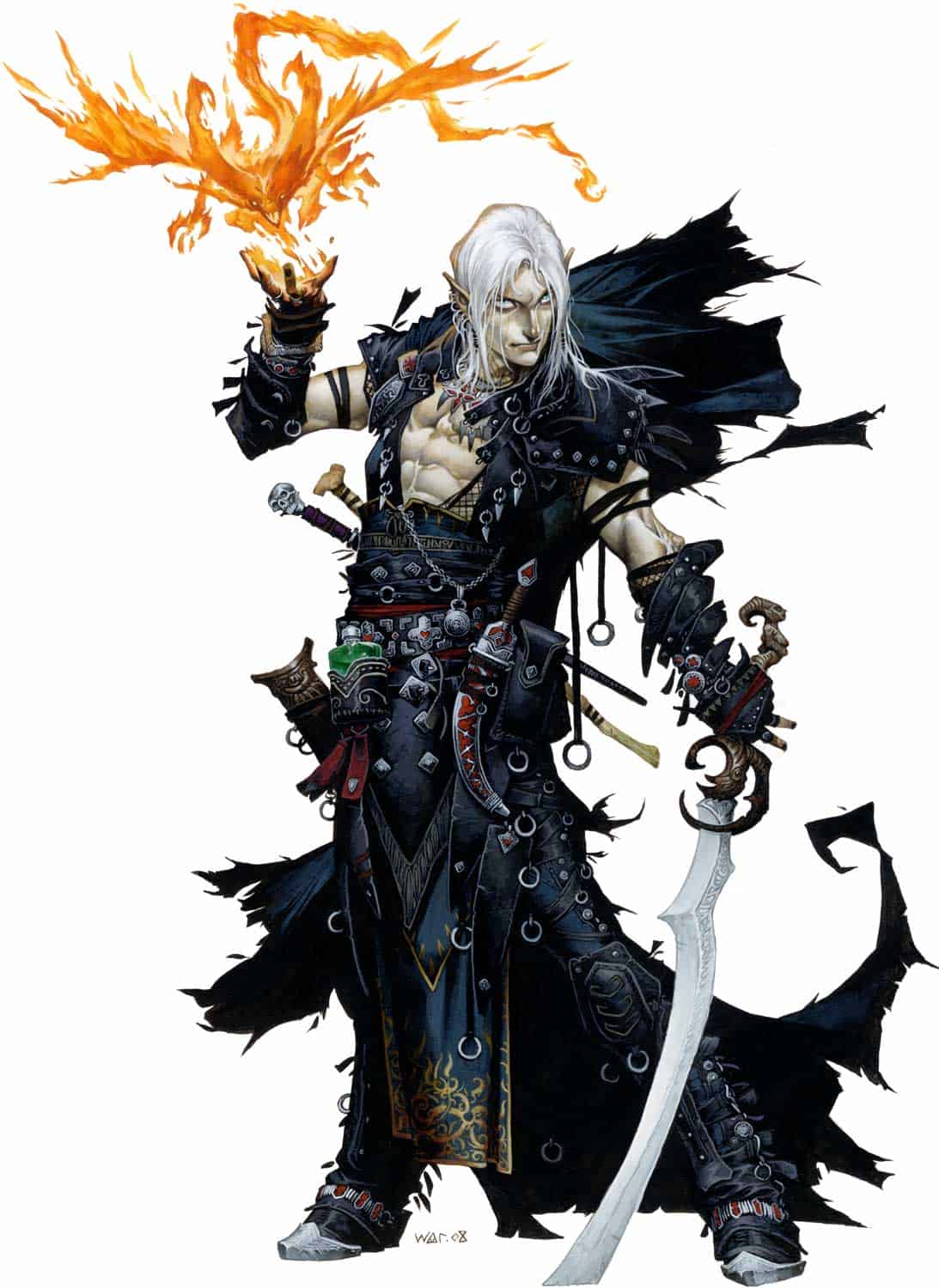 Born from a dead mother amid screams and disgrace, this sickly half-elf would never have survived had he fallen into his stepfather’s waiting arms. In a cruel trick of fate, his half-sister’s tears stole the infant Seltyiel’s chance for a mercifully short life.

The bastard son of the duped Lady Phiaura Bhrostra and the brigand-sorcerer Lairsaph—the so-called Feign Prince of Cheliax’s Whisperwood—Seltyiel was never meant to survive. Through guile and illusion, the half-elf was conceived as a living disgrace to the sonless Bhrostra family—stern, martial-minded traditionalists who had long hunted the woodland bandits. The tragedy of his wife’s death in childbirth, compounded by the dashed promise of a male heir, nearly drove Lord Ghran Bhrostra mad, and only his daughter’s sobs stayed the lord’s blade. For the next 12 years, a continuing river of tears ensured the young bastard’s life.

Raised by his sister Sioria, young Seltyiel lived a humiliating fiction. In words, he was Lirt, an adopted waif who lived in the light of the Bhrostras’ boundless charity. In the truths whispered from servant to mocking lord, though, he was living proof of Lord Bhrostra’s failure as a husband, a lord, and a man. Keenly aware of his family’s disgrace, Lord Bhrostra frequently reminded his wife’s son of his loathing with beatings and broken bones.

Two weeks before Seltyiel’s 13th birthday, with the bedridden youth already nursing a thrice-broken arm, a drunk and enraged Lord Bhrostra rampaged into the bastard’s attic room. The boy could scarcely fight against the burly lord and took a fierce beating before reflexively lashing out. Catching the unsuspecting lord below the waist, the boy’s blow sent Lord Bhrostra stumbling backward and tumbling down the steep attic stairs. Seltyiel stared down at his stepfather’s unconscious body in terror. Without a word to his sister, the bloodied and crippled half-elf fled into the Whisperwood that night.

For days, the boy wandered the forest, soaked by rain, slashed by vipervines, chased by a boar, and pushed to the brink of starvation. As his continued merciless fortune would have it, though, three scowling brigands found the youth. Terrified, Seltyiel repeated the name he’d heard Lord Bhrostra curse a thousand times over: Lairsaph. Bemused, the scoundrels dragged the boy to his father.

Lairsaph laughed for nearly an hour after discovering that Lord Bhrostra had actually raised his whelp, and in cruel amusement welcomed his son into his camp. The Feign Prince gave the boy the name Seltyiel—a corruption of the elven word for malicious humor—and turned his mind to finding a use for the youth. In the weeks following his son’s arrival, the sorcerer made several cruel attempts to coax forth some evidence of the boy’s inborn arcane ability. Despite his efforts, though, it swiftly became apparent that his son possessed none of the brigand lord’s sorcerous blood. Disgusted, Lairsaph dismissed Seltyiel, relinquishing him to the ranks of his craven, sycophantic followers.

For the next decade, Seltyiel scraped out a life among the thieves of the Whisperwood. Pale, morose, and slight of frame, he suffered endless abuses at the hands of his father’s gang, and as Lairsaph and his men grew rich off brigandry and violent raids, the half-elf performed menial tasks and scavenged from scraps. Gradually, though, as the boy grew into a young man, he cultivated a quiet intellect and began collecting the objects his father and his men discarded—typically the letters, ledgers, and books of the merchants they preyed upon. Slowly he taught himself to read, first Taldane, then other languages. As he neared his 20th birthday, he made his greatest discovery amid a treasure-stripped caravan wagon: a tattered tome, a book of simple magic. Seltyiel became obsessed. For years, the bastard read the tome over and over, learning its runes, memorizing its symbols, and gaining some measure of control over the cantrips within.

In the half-elf’s 23rd year, Lairsaph and his men made a daring robbery, stealing a fully-loaded taxwagon headed back to Egorian from the Majestrix’s eastern holdings. Although cunning, the brigand lord was unprepared for the infernal queen’s swift reprisal and the skill of her hunters. A half-legion of Chelish soldiers led by an Order of the Rack Hellknight tracked Lairsaph to his hidden camp and turned an evening’s debauchery into a night of fire and blood. The swift attack scattered the Feign Prince’s men, making them easy pickings for the merciless soldiers. In a blur of shouts and slashing blades, Seltyiel found himself fleeing—to his shock—at his father’s side. Through the night, war hounds and the tenacious Hellknight pursued the father and son. Lairsaph exhausted every spell he could conjure attempting to stymie the ironclad hunter, but still the infernal knight came. Finally, knowing his capture would mean a lengthy torture followed by a dramatic execution, Lairsaph turned to his son, drew him close, and, with the butt of his spear, shattered Seltyiel’s kneecap.

Knowing only that the criminals of the Whisperwood were led by an elf, the Magistrix’s men drug Seltyiel back to Egorian in chains. For weeks, the half-elf suffered constant tortures and arcane assaults to his mind. Gradually, though, his captors accepted that he was not the brigand lord Lairsaph, but merely the Feign Prince’s dupe. Dismissed as just another bandit, he was thrown into a dank Chelish dungeon and, for nearly 5 years, left to rot.

During Seltyiel’s imprisonment, the whispers came. Seemingly drifting from the darkness in the depths of his reeking cell, they were a cool balm to the fires of his angry wounds and smoldering hatred. They reminded him of his fear, his violent youth, his loathing, and betrayal. They also told him much: tales of magic more ancient than the gods, paths to lost treasures with feckless guardians, and the names of beings who could teach him secrets unknown to men. For long years he listened, and his soul turned to steel. If he was to ever have anything, he would have to take it himself. He would have riches and influence like Lord Bhrosta. He would have respect and fear like Lairsaph. He would have revenge.

In 4707, Seltyiel was released. Cold and determined, he walked from Egorian to Westcrown, murdering two thieves met along the way with arcane fire. Using their twice-stolen coin he bought passage on a ship with no clue as to its destination. He would kill his fathers, he would have revenge—but first, he would have power.