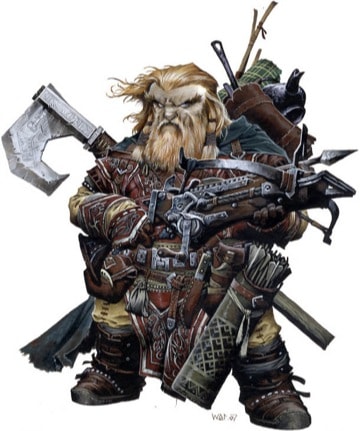 Not all dwarves are meant for the mines. As a young dwarf, Harsk spent every spare moment outdoors under the wide skies of southeastern Varisia, particularly at night beneath the stars, where his keen vision made him a hunter without compare. While generally uninterested in his family’s traditional smithing, he still inherited enough of their tinkering ability to construct his own crossbow, a heavy, highly accurate weapon that few others are able to wind. Eschewing the company of his fellows, few things made Harsk happier than crouching in a tree stand with his bow, listening to the wind through the forest leaves and waiting for deer or larger prey to wander by.

That all changed twenty years ago, when his elder brother, a fine captain named Sigur, led a dwarven war band from Janderhoff against a small party of giants that had descended from the Mindspin Mountains to raid and pillage. Out of affection, Sigur offered his less-experienced sibling the chance to come and prove himself as Sigur’s chief scout and second-in-command. Calm and peaceful by nature, Harsk turned him down, failing to see the honor his brother was doing him until several days after the company had departed. Traveling light and fast, Harsk caught up with his brother quickly—but not quickly enough. Misjudging the size and skill of the raiding party, Sigur led his band into an ambush, where it was slaughtered to the last dwarf.

With his brother’s blood still fresh on his hands, Harsk went mad with rage. That night, he stalked through the giants’ camp like a vengeful wraith, slaughtering giant after giant with his crossbow before melting back into the forest, only to reappear elsewhere and take another victim. When the last giant was left gurgling in the dust, Harsk took up his brother’s axe and slipped off into the trees, vowing to forever be the voice of justice in the wild places, to keep balance and prevent the sacrifices of noble men like his brother.

Harsk, like many of his kind, is gruff and taciturn, but there ends most of his connection to dwarven society. Something of a loner, he prefers to spend his time outdoors, communing with nature, though he occasionally travels alongside others whose goals match his own. Uninterested in the beer and ale that so characterize dwarves in the minds of human society, Harsk instead drinks pot after pot of strong tea to keep his senses sharp. While he never lets his brother’s axe out of his sight, he wields it only as a last resort, knowing that his true skills lie in the hunt and striking from darkness.