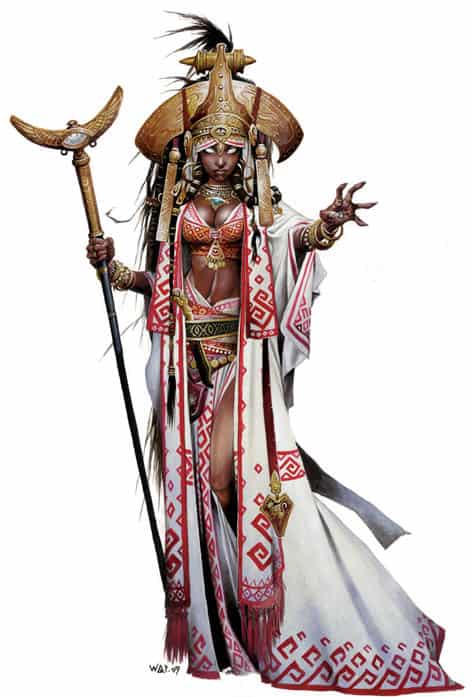 Only those who refuse to see truth are truly blind. Such is the verdict of Alahazra, bride of the sun and prophet of the burning sands.

Alahazra was born in a small Rahadoumi town east of Manaket, one of the many way stations on the caravan route known as the Path of Salt, which leads from Azir all the way to distant Sothis and takes its name from the waves of the Inner Sea and the dried tears of the slave chains that march along it. The daughter of a wealthy and widowed wainwright, Alahazra wanted for nothing, growing up with the best tutors money could buy, all the time being groomed for a potentially lucrative marriage, or perhaps even induction into the Occularium, Manaket’s prestigious wizard’s college.

All of that changed on the morning when sixteen-year-old Alahazra woke to find herself suddenly and inexplicably blind, her eyes clouded by a white mist that gave her only vague outlines of her surroundings. Beside himself with grief, her father called in the best healers to be found in the godless land, only to discover that the situation was worse than he could have imagined. For when the bards with the healing touch reached out to the fevered child, they were suddenly cast back by a blast of flames that burned the girl’s sickbed but left her magically unharmed. Yet even this might have been bearable, had the fleeing bards not revealed the rest of their discovery: that the girl’s flames bore no hint of sorcery or arcana. Though Alahazra’s staunchly atheist father could scarcely believe it, his proper Rahadoumi household harbored a burgeoning cleric.

Confronted by her enraged father and frightened by the new abilities that she felt burning inside her skin, Alahazra protested her innocence loud and long, but to no avail. Sickened by what he saw as a betrayal of both his trust and his national pride, Alahazra’s father did his daughter a final kindness and cast her out with no more than the clothes on her back, instructing her to run before the Pure Legion arrived to take her into custody—and let her gods be her new family, for she no longer had one in Rahadoum.

Blind, weak, and weeping with frustration and rage, Alahazra stumbled southeast into the desert, seeking what meager shade and water the badlands had to offer. For days she wandered, seeking only to put distance between herself and any pursuers who might still seek revenge for her presumed heresy, until at last she collapsed in the lee of a dune, dehydrated and dying.

It was there, staring up through milky cataracts at the burning ball of the sun and letting the wind slowly bury her in the hot sand of the dunes, that Alahazra had her first revelation. Behind those ruined eyes, a vision of debilitating color suddenly exploded. In it, Alahazra saw herself not as she was, but as she one day would be—strong, proud, and fierce. In that moment, Alahazra understood that she was more than just a girl. She was a force of the desert—a voice of sun, sand, and flame—and she would bring its truth to the people, whether they were ready for it or not. Baking slowly in the hot coals of the great Garundi desert, Alahazra came to know herself, and in doing so first harnessed the magical flames that had been building inside her.

With the aid of her newfound abilities, Alahazra moved steadily east, crossing into Thuvia and following the Path of Salt until she finally came to rest in Osirion. There she roamed as she willed through the great cities and barren plains, offering wisdom and healing to the righteous and cleansing fire to the wicked. In time, her notoriety grew, offering her passage into higher social circles, and it’s whispered that she made consorts and admirers of several powerful men, possibly even entering the court of the Ruby Prince. Alahazra herself, however, speaks little of her past. For her, only the future is a concern, and her duty is to defend it as best she can, with a clarity of vision that disdains sight.

Now a grown woman, and still attractive enough to turn the heads of slaves and rich men alike, Alahazra is kind but distant, often letting conversation drop in favor of taking in the sounds and smells of her environment. When she does speak, in her low, throaty voice, her words have the weight of command. Alahazra has little patience for fools (most notably those who let money or pride blind them to truth and justice), yet also has a soft spot for orphans, and in her own stern way often sees herself as the mother to her adventuring companions. Though she maintains that she has never worshiped a god—the cornerstone of her bitterness toward both her father and her homeland—she has come to respect a wide variety of deities, whom she refers to as “powerful and strategic allies.” And while her detractors might call her cold, in battle Alahazra’s burning rage—especially toward injustice and intolerance—still comes roiling out in a wall of divine flame.