Bumps in the Night Kickstarter 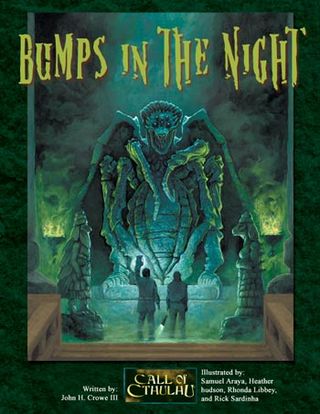 Pagan Publishing is a small but award-winning publisher of role-playing games, specializing in books and supplements for the Call of Cthulhu role-playing game. They have completed work on a new collection of five game scenarios entitled “Bumps in the Night” written by John H. Crowe III. All five scenarios use the Call of Cthulhu Basic Role Playing mechanics, but none of them are based on the Cthulhu Mythos. Instead the players will have to face obscure horrors from the world of myth and folklore. At 120 pages, “Bumps in the Night” is beautifully illustrated by Rick Sardinha, Heather Hudson, Samuel Araya and Rhonda Libby. It will be produced as a 8.5″ x 11″ softcover, with glossy color exteriors and grisly grayscale interior artwork.

I mentioned the possibility to pre-order Bumps in the Night in a earlier post. After some customer pre-orders Pagan still needed to raise another $2,500 dollars to cover the rest of the printing and shipping to their warehouse. Well, they got that within 24 hours and more. And more. The counter of the Bumps in the night Kickstarter Fundraiser currently stands at $9486 causing Adam Scott Glancy to add the following reaction:

To say that I was surprised to see that you, Pagan’s fans, met our fund-raising goal of $2,500.00 in less than 12 hours would be a bit of an understatement. By the end of our first day I was running out of words to describe how shocked I was by the generosity of our fans and by the good-will Pagan Publishing still has. Three days in and I am speechless.

Of course, since exceeding our fund-raising goals was not a subject I put any thought into, I have been playing a bit of catch up on this subject. Every time I think “I’ll add a reward for everyone when we hit the $4K mark,” suddenly we’ve passed the $4K mark. Okay, I’ll add the new reward when we hit $5K…

We’ve got the $6K goal splashed all over our grill. Clearly I’m going to have to add the rewards and not worry about the pledge levels because you folks are exceeding my expectations faster than I can conceive them.

So let’s begin by offering a couple of new rewards to EVERYONE who has pledged.

Everyone who pledged to this project will now receive two pdfs. The first pdf will be a collection of all the player handouts, floor-plans and maps for the scenarios in Bumps in the Night. That will save you from having to stretching the spine of the book photocopying those pages for your players.

The second pdf will be a set of pre-generated characters that I created for running the scenario “The Vengeful Dead” at game conventions. Your players may enjoy using them or maybe you can use them to fill out the guests at the resort if your players prefer to roll up their own characters.

However, that does not cover any so-called Stretch Goals, that is new aspects or enhancements for a project that can be added as new pledge levels are achieved. I won’t add anything to Bumps in the Night that might delay the book going to press. I also don’t want to collect funds for a project that cannot be immediately sent to press (or at least isn’t extremely close to completion). Therefore the only Pagan project that could qualify as being ready to go sans an infusion of cash is the softcover edition of Delta Green: Targets of Opportunity. However, it requires a great deal of cash. To print and ship it would be (as per my last print bid) another $8,740.00 And that doesn’t include paying the artists, the writers and the licensing fees.

So, I am hesitant to make the funding of Delta Green: Targets of Opportunity a stretch goal for this fundraiser. My inclination is to take any money over and above our goals for Bumps in the Night and put into a nice warm savings account, so that when we do a fundraiser for Delta Green: Targets of Opportunity, soon after this Kickstarter ends, then we’ll just have that much less money to raise. I feel this would be less confused and allow for a package of backers’ rewards that are tailored for a Delta Green product.

Nevertheless, none of this would be possible without you, Pagans fans and backers. So I am certainly willing to entertain any suggestions you have. Would you prefer a separate Kickstarter or would you prefer to try and pile on the momentum of this one and build it to a two-for-one fundraiser? I’m also interested in any suggestions you folks might have for additional rewards you might be interested in. Certainly there are playtest notes that could be shared. There are other Pagan Publishing books that could be mailed out with your copy of Bumps in the Night. None of these possibilities would be here if it wasn’t for your generosity so I am open to any suggestions you might care to offer.