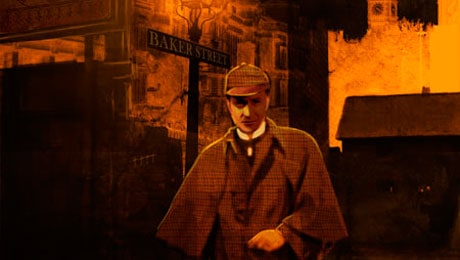 Baker Street is a role playing game developed by Bryce Whitacre and will be published by Fearlight Games.

In Baker Street the players are investigators helping Dr. Watson solve cases as Sherlock Holmes is presumed dead after an encounter with his nemesis James Moriarty.

What makes Baker Street unique is the Sherlock Die, a special die that is rolled with every roll in the game. The Sherlock Die features the numbers 1, 2, 3, a Watson icon, a Moriarty icon, and a Sherlock icon. The numerical values represent the number of successes, the Watson icon represents an extra success, Sherlock’s icon gives the player the option to choose a 1, 2, or 3, while Moriarty’s icon is a bad result.

Investigating a scene is the driving engine of this game and players are making Observation, Deduction, and Reason Skill Rolls in order to uncover clues and leads for their investigation.

The game also has a status statistic that is used in social interactions. Opposed Status Rolls are made when the investigators try to convince someone, or charm their way out of a difficult situation.

The Baker Street RPG Kickstarter has already received 4 times more funding than initially needed. The next stretch goal that will be reached will unlock the Mastermind Screen which will be added to all backers who receive the physical book.