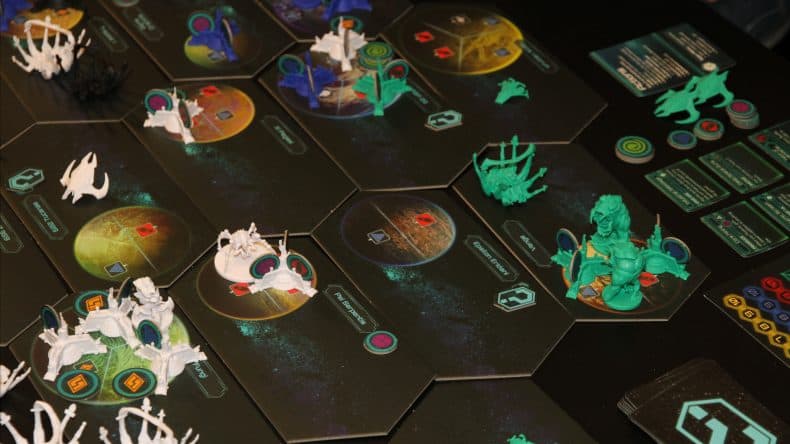 On the 17th of December I returned to the Spelhuis gaming store for another Hyperspace demo. Hyperspace is an upcoming space exploration game by Petersen Games that is coming to Kickstarter in January of 2019. Check out the Petersen Games Hyperspace website to discover all the different races that will be available in the game.

This time we played a 4 player game. Jo and Johan were new players, my buddy Carsten, who played the game in my previous Hyperspace demo, wanted to play again so he joined a second game. I let the other players choose their alien races. Jo ended up with Fungi, Johan played the Skith, Carsten tried the Venge, and I ended up with Broodmaster once again.

Fungi and Venge took a quick lead in Victory Points but the game slowed down a lot because of their hesitance (or plain refusal) to engage in combat. Only the Venge managed to get to the 4th location on the Probe track. It took a while but the first battle was fought between Broodmaster and Skith where the Skith wiped the whole Broodmaster fleet from the board.

“For a 4X game, Hyperspace is very accessible when it comes to rules. “

“The asymmetric aspect is there but it doesn’t change the base rules. It’s not so strong that it becomes complex and that is really nice.”

Johan: Hyperspace is very accessible when it comes to rules, the diversity in races and research is really good, the resource management is very logical.

Jo: There are few subrules that make the game complex, that’s positive. It’s not as asymmetric as games like Vast or Roots where you really have different rulesets. Here, everyone has asymmetric powers but it doesn’t change the base game.

Jo: A personal preference of course, but I really don’t like battling other players so I don’t think I would play this game again. If there would be other ways to victory, that would be a very big plus for me. In this game 2 of us waited really long before we started battling and that slowed down the game immensly.

Johan: It’s true that the game shifts focus towards battle at a certain moment. But of course this is normal for a 4X game, it’s one of the X-es. I think Hyperspace is very accessible for a 4X game, but it being a 4X game plus the space theme, caters towards a specific audience. My wife for example would say that it’s a ‘boy’s game’ and wouldn’t play it. I agree with Jo though about the asymmetric part. It’s not so strong that it becomes complex and that is really nice.

Johan : The miniatures are really nice, especially the unique miniatures.

Carsten: We did however almost run out of Metal tokens because they were placed in all the colonies. The set-up of the planets was quite metal-heavy.

Johan: The fact that even as the defender you still get to do damage is really nice. There’s a good amount of tension but you’re never left with the feeling that you can’t accomplish anything anymore.

Jo: That’s correct. Even though you get completely wiped from the board, you still get to do damage. The battles are also smaller in importance than in other games, and you can rebuild very quickly.

Carsten: We had a couple of big battles in this game. It would be cool if the miniatures could be placed on a different location and you’d have an Armada token to place on the tiles.

Johan : I think the race sheets could be improved a bit in terms of layout, colors, font size.

Jo: I think the Broodmaster ability to replace colonies is maybe a bit overpowered. I think that can have a very big impact in the beginning of the game.

Carsten: I agree. Maybe that could have cost an extra Hypertoken.

by Ralph on January 11, 2019
On the 14th of December I visited the local Spelhuis gaming store in Zonhoven to demo the upcoming Hyperspace game. Hyperspace is a space exploration game by Petersen Games coming to Kickstarter in Januari 2019. My buddy Carsten and I played a two-player [...]
comments
Leave a reply