Adventure Seeds : The Diamond Sanctum of the Loathsome Daughter 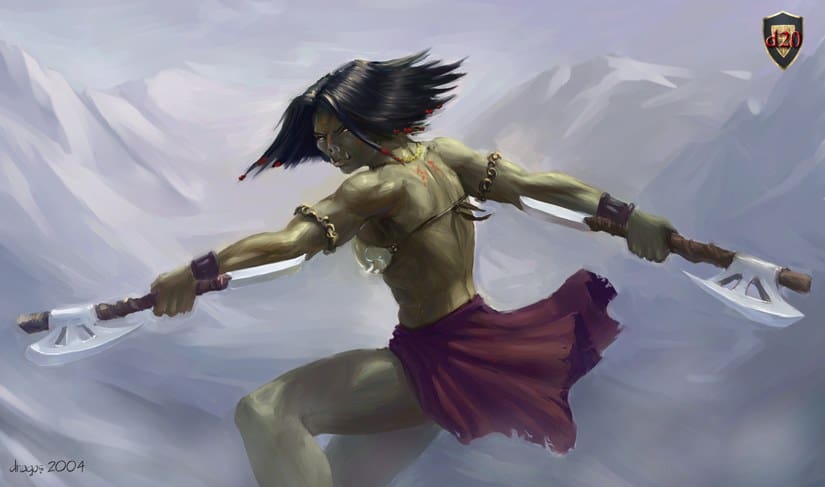 Seeing that I’ve come to the conclusion that original content is what makes a blog tick, I decided to think of a few new categories which I could add to the blog.

Adventure seeds are always nice to have. You see an idea, adapt it a bit, and you’re ready to go. So here’s my first attempt at such an adventure seed. I’ll keep it free from setting material as much as possible so it can be easily inserted into any campaign world.

The characters are sent to mercenary captain Rane Colworth to acquire the services of him and his men. Rane however, has a mission of his own that needs fulfilling. He’s hunting down a half-orc warrior named Rhaga, who has been raiding villages with her band of orc followers, and during a recent raid has kidnapped Rane’s 12 year old son. The mercenary company has been able to track the orcs to an abandoned diamond mine. If the party can bring back his son Taro and Rhaga’s head, Rane will provide his services at a serious discount. Harren Ligger, Rane’s most trusted lieutenant, will accompany the party into the mine.

20 years ago, Rane’s first wife Elisa was taken prisoner during an orc raid on their native village. Rane only learned of the raid months later when he returned home from a mission. A man possessed with as sole focus revenge, he spent the next sixteen years hunting down the orc tribe responsible for the raid. When he finally located the orcs, he set up a raid of his own and completely wiped out the tribe. To his amazement, his wife was still alive. To his horror however, she clutched to her breast a 15 year old half-orc girl named Rhaga, born from multiple unwanted matings with her orcish captors.

Prideful as he was, Rane could not live with the shame of his wife having born orcish offspring so he ordered them both killed. Rhaga fought valiantly to protect her mother but she couldn’t hold her ground against the trained mercenaries and was forced to flee. Elisa Darfour died that day and both Rhaga and Rane vowed to not rest before the other was dead.

Over the years Rhaga changed into a powerful and fierce warrior and rose up in the ranks of her tribe. Eventually she challenged the tribe leader and killed him easily making the tribe her own. Travelling back towards Rane’s native village, she assembled quite a host of orc followers. When raiding villages she does so using her mother’s maiden name Darfour in the hopes of encountering Rane’s mercenary company to oppose the orc invasion. Prominently displayed around her neck is a silver medallion she received from her mother. The back of the medallion reads “To my love Elisa Darfour, Rane”.

Rane, hearing rumours of a Rhaga Darfour raiding villages, assembled his men immediately. His scouts have been able to track Rhaga to an abandonned diamond mine. At about the same moment, the adventuring party meets up with Rane looking to secure his services. Rane makes up the story about his son being abducted, and sends Harren Ligger along with clear orders to kill Rhaga at all cost.

Rhaga can be reasoned with but seeing Harren, one of Rane’s men, among the party will make her initial reactions quite hostile.